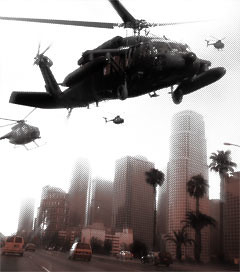 The Los Angeles Police Department will be providing support for a joint military training exercise in and around the great (sic) Los Angeles area.  This will be routine training conducted by military personnel, designed to ensure the military's ability to operate in urban environments, prepare forces for upcoming overseas deployments, and meet mandatory training certification requirements.

NDAA, as the bill signed into law by Obama on New years Eve has come to be called, allows the indefinite military detentions of US citizens without charge or trial.

If you notice a heavy military presence around downtown Los Angeles this week, don't be alarmed -- it's only a drill.

The military deployed a Black Hawk, a helicopter that has served in combat in Iraq and Afghanistan, and four OH-6 helicopters.  According to Truthout.org, at one point they flew just above the US Bank building downtown.

Hedges in an interview with Democracy Now speculated that, since the national security establishment, NSA, FBI and other agencies charged with protecting the country against terrorists actually lobbied against the NDAA, the true impetus for it was the fear among corporate elites of an expanding Occupy Wall Street movement this summer.

"And I think, without question, the corporate elites understand that things, certainly economically, are about to get much worse. I think they're worried about the Occupy movement expanding. And I think that, in the end--and this is a supposition--they don't trust the police to protect them, and they want to be able to call in the Army."

This month Occupy DC continued to press Congress with the message of getting the influence of money out of politics. Reuters reported on Jan. 17th:

"Demonstrators from the Occupy movement rallied at the Capitol and congressional office buildings on Tuesday to protest against the influence of money on lawmakers....Occupy protesters from around the country who gathered on the Capitol's rain-soaked lawn carried signs saying, "Face it liberals, the Dems sold us out," "Congress for sale" and "Banksters of America.""

The influence of money on the political process has been well-researched and documented by citizen watchdog organizations such as MAPLight.org.  In a report relating to the TARP bank bailouts MAPlight.org found that congressmen who voted for TARP, the "Troubled Assets Relief Program," received nearly 50 percent more in campaign contributions from the financial services industry (an average of about $149,000) than congressmen who voted no.

As Commander-in-Chief of the US Armed Forces Obama must sign off on all deployments and exercises.  This would seem to apply especially to deployments as politically sensitive as those in direct violation of the spirit of Posse Comitatus, the post-Civil War law intended to bar the use of the military for domestic law enforcement.  This is a role for which the National Guard was designed in case of emergencies.

In his lawsuit against Obama and the National Defense Authorization Act of 2011 (NDAA,) also known as the Homeland Battlefield Bill, Hedges charges in Count I of the official complaint:

The Homeland Battlefield Bill, -1031(C)(1) authorizes the indefinite detention, imprisonment and incarceration of U.S. citizens and other "covered persons" in the United States, including persons such as Plaintiff, without trial or judicial recourse in violation of the U.S. Constitution, Amendment V.

The congressional drive to pass provisions which allow for the indefinite military detention of American citizens without charge or trial was accompanied by wording in the bill which Congressman Justin Amash called "carefully crafted to mislead the public."

Americans across the country will gather outside congressional offices Feb. 3rd from noon to 7 p.m. to protest NDAA 2012 (H.R. 1540). You will find your protest location by looking to see how your congressmen voted. Look below - under house and senate. There is also a link so you can find the address to your congressman's local office where your protest will take place.

A number of recall campaigns have begun against congressmen and senators who voted in favor of NDAA, as well as other state-level actions which challenge and seek to nullify the detention of Americans provisions.  In Virginia, legislators in the House of Delegates have filed House Bill 1160 (HB1160) which "Prevents any agency, political subdivision, employee, or member of the military of Virginia from assisting an agency or the armed forces of the United States in the investigation, prosecution, or detainment of a United States citizen in violation of the Constitution of Virginia."

Related Topic(s): Brand Obama; Michelle-obama; Ndaa National Defense Authorization Act, Add Tags
Add to My Group(s)
Go To Commenting
The views expressed herein are the sole responsibility of the author and do not necessarily reflect those of this website or its editors.