"From lofty heights, Obama has now become a dampener of hope, a barrier to change, and a threat to progress." 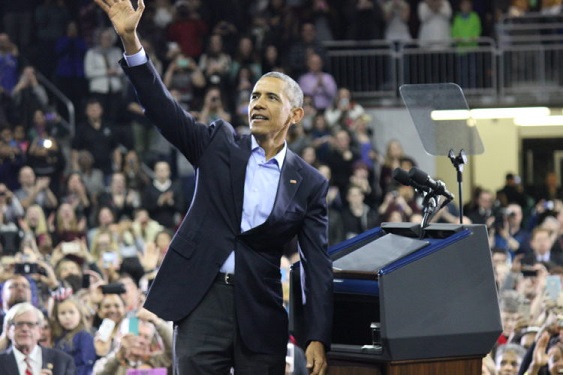 Former President Barack Obama reportedly told advisers behind closed doors earlier this year that he would actively oppose Sen. Bernie Sanders if the progressive senator from Vermont opened up a big lead in the 2020 Democratic presidential primary race.

"Publicly, [Obama] has been clear that he won't intervene in the primary for or against a candidate," Politico reported Tuesday. "There is one potential exception: Back when Sanders seemed like more of a threat than he does now, Obama said privately that if Bernie were running away with the nomination, Obama would speak up to stop him."

Progressives viewed Obama's comments as further evidence that the former president, who was elected in 2008 on the soaring promise of "hope and change," is now using his influence on the Democratic Party to undercut the grassroots push for transformational policies like Medicare for All and the Green New Deal.

"Obama's post-presidency is grating and full of contradictions," tweeted David Klion, news editor at Jewish Currents. "He considers himself the leader of the party but refuses to lead. He considers himself a success but the mere fact of Trump's presidency belies this. He won on hope and counsels hopelessness."

One anonymous Obama adviser would not confirm to Politico that Obama "would really lay himself on the line to prevent a Sanders nomination."

"He hasn't said that directly to me," the adviser said. "The only reason I'm hesitating at all is because, yeah, if Bernie were running away with it, I think maybe we would all have to say something. But I don't think that's likely. It's not happening."

According to Politico, Obama plans to speak out more frequently about the state of U.S. politics in the coming weeks. Earlier this month, Obama told a roomful of rich donors that he is worried about "certain left-leaning Twitter feeds" and "the activist wing of our party," sparking outrage from progressives.

"Over the next year, Obama, according to his closest advisers, will start to emerge with slightly bolder colors," Politico reported Tuesday. "The boldest might be riding into a battle unfolding on his own side, if he did lead a potential stop-Bernie campaign."

Obama advisers told Politico they don't believe Sanders has a chance to win the Democratic presidential nomination. But recent polling suggests the Vermont senator is experiencing what his campaign described as a "surge."

commondreams.org is a progressive publisher
Related Topic(s): 2020 Elections; Obama; Obama Criticizing Bernie As Too Far Left; Obama Post Presidency; Sanders-Bernard, Add Tags
Add to My Group(s)
Go To Commenting
The views expressed herein are the sole responsibility of the author and do not necessarily reflect those of this website or its editors.