A Brief Review of a "Worldview " 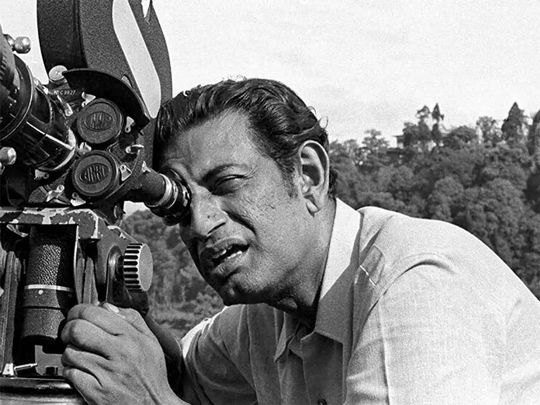 Satyajit Ray behind the camera
(Image by aisna-graduates.online)   Details   DMCA

Above is the link to an essay from Counterpunch, an online webzine which is among my go-to resources for political and socio-cultural news. However, this abysmally condescending article by Jonah Ruskin, who apparently does have reasonable scholarship on the Beat movement and other justice movements in the US, yet demonstrates unimaginable ignorance and a pathetic sense of "pity" towards India.

The article ostensibly is about the current Centennial celebrations of the birth of world-renowned, pre-eminent "cinematic poet" (New York Times, obit. April 1992) and filmmaker, Satyajit Ray, whose work goes far, far beyond the Apu Trilogy. But the Apu Trilogy is all that Mr. Ruskin is stuck on, and even then with such tunnel vision, it is downright shameful he has as such not even conducted a more informed (if superficial) check of SR's oeuvre.

Mr. Ruskin writes about having visited New Delhi (I believe recently), and having seen miles of human beings living in cardboard shacks. Granted, the poetic filmmaker SR depicted the realities of the poor in India, especially one left deeply impoverished after centuries of (in the last stages, of European, especially English) colonial oppression, loot and plunder. Any student of history must immediately make the socio-political connections relative to such poverty. Of course, right now, today, I could set up endless scenes and tales of graphic poverty in the US, and its never-ending history of barbaric racism and violence.

Depicting poverty within India, and among families steeped in tradition going back millennia, is not simply about "living in cardboard shacks." The Indian divergence that Mr. Ruskin writes about (today's India vs. Ray's India)- well, it is increasingly so much open to a chasm precisely because as of the 1990s, India has (somewhat imprudently, in my view) begun to emulate the crass market-economy Western model- one where the poor simply do not belong, and if on other shores, are only good for a few bombs (napalm, spent uranium, drones and killer missiles- the list is endless). I am appalled that a scholar who has apparently written tracts on The Howl by Allen Ginsberg, and work related to other progressive, left-leaning movements, holds a country of India's magnitude and history with such glasses of pity, that the signal I receive is that if one Indian from this pathetic pool offers a more credible sample of story-telling, he or she must be the great exception.

Thus, SR, whose last name by pure coincidence is identical to that of Harihar Roy, the Brahmin priest from Pather Panchali, Bibhuti Bhusan Bandyopadhyay's immortal novel (and hence in Mr. Ruskin's judgment, the "Ray"s must belong to a lineage of cardboard shack families)- apparently "was relatively better off."

Would Mr. Ruskin ever begin to the grasp the stupendous achievements of Ray's family- a renaissance family by any world measure? I will not commence here a discussion of their contributions to art, literature, journalism, invention and even politics. I am OK with Mr. Ruskin citing Franz Fanon (I tend to think this is the fashionable thing to do, since doing so establishes your bona fides re. the travails of the poor)- but, despite many stark truths in the layered history of India regarding social stratification, deprivation, superstition and throwback to the past (outside of colonialism) which resonate with FF's magnificent work on the plight of Blacks in Africa and especially in the US, Satyajit Ray was ultimately a deeply sensitive artist who took up artistic portrayals of human suffering (something which exists in exalted art from anywhere in the world), filled with insight and unlimited empathy (yet free from sentimentality).

Mr. Ruskin's mentioning (Indians from SR's time) ate with their fingers/hands, and a few other misplaced stereotypes and prejudices, actually reminds me of a little-known fact about the otherwise widely regarded director (whose films I have myself admired much), Francois Truffaut- who apparently reviewed Pather Panchali in 1956 quite negatively, with the prevalent Western disgust for the darker races. FT apparently had written- I refuse to even see any film showing peasants eating on the floor with their hands. I have read that FT later retracted his initial negative views. But stigmas and biases never really go away. The idea of the Kupamanduk (Frog in the Well) from India's classic ancient tales (a treasure trove for the world) aptly applies to such "refined" observers.

I may yet write an appropriately appreciative article on SR (not that he is in any need for my plaudits)- but when I first saw this essay at Counterpunch, I was naturally excited. Reading it, I am deeply disappointed, and even despondent, that in a world now with even wider gaps between the Haves and the Have-Nots, such polarized thinking only contributes to condescension and misplaced pity.

[Following my initial posting in my Facebook timeline, I also added the following clarifier, attempting in all fairness to not be overly harsh towards the author of this review of Satyajit Ray's worldview (something the essay, I still maintain, fails miserably to do).

""As an additional footnote- let me say that the author probably did not intend any slight, at least not consciously, and he does get a thing or two right. The fact that SR may not be lauded across India is actually correct. There is a large bandwagon with the Nargis Dutt types who have propelled the faux jocularity and glamour of Bollywood cinema as a fake version of India- this has of course taken much from the realism of Indian art cinema and the thinking minds behind it. He does also offer some praise to both SR and Ravi Shankar, but the entire exercise is naive, inept and very poorly studied. As a long-time University teacher, I would at best give it a D.

Related Topic(s): Author; Celebration; Culture; Essay; Essay; Renaissance; Renaissance; Tribute, Add Tags
Add to My Group(s)
Go To Commenting
The views expressed herein are the sole responsibility of the author and do not necessarily reflect those of this website or its editors.