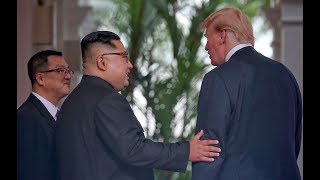 Given his allegiance to boosting corporate profits, it's no surprise that Donald Trump is counterbalancing the effects of the Singapore Summit's steps toward denuclearization with a Nuclear Posture Review that steers the US toward developing leaner and meaner nukes and lowers the threshold for using them.

The United States has allocated $1.7 trillion to streamline our nuclear arsenal, despite having agreed in the Nuclear Non-Proliferation Treaty in 1968 to work toward nuclear disarmament.

Meanwhile, the US maintains a stockpile of 7,000 nuclear weapons, some 900 of them on "hair trigger alert," according to the Union of Concerned Scientists.

"If weapons are used they need to be replaced," Brand McMillan, chief investment officer for Commonwealth Financial Network has argued. "That makes war a growth story for these stocks, and one of the big potential growth stories recently has been North Korea. What the agreement does, at least for a while, is take military conflict off the table."

Moreover, economic incentives surrounding conventional weapons also cut against the promise of peace on the Korean Peninsula. Eric Sirotkin, founder of Lawyers for Demilitarization and Peace in Korea, has pointed out that South Korea is one of the largest importers of conventional weapons from the United States. If North and South Korea achieve "a lasting and stable peace regime on the Korean Peninsula," as envisioned by the agreement between Trump and Kim Jong Un, the market for US weapons could dry up, according to Sirotkin.

Even so, US defense spending will continue to increase, according to Bloomberg Intelligence aerospace expert George Ferguson. "If North Korea turns from a pariah state to being welcomed in the world community, there are still enough trouble spots that require strong defense spending, supporting revenue and profit growth at prime defense contractors."

The US Lags Behind on Denuclearization

Last year, more than 120 countries approved the Treaty on the Prohibition of Nuclear Weapons, which requires ratifying countries "never under any circumstances to develop, test, produce, manufacture, otherwise acquire, possess or stockpile nuclear weapons or other nuclear explosive devices." It also prohibits the transfer of, use of, or threat to use nuclear weapons or nuclear explosive devices.

Since the treaty opened for signature on September 20, 2017, 58 countries have signed and 10 have ratified it. Fifty countries must ratify the treaty for it to enter into force, hopefully in 2019.

The five original nuclear-armed nations -- the United States, Britain, France, Russia and China -- boycotted the treaty negotiations and the voting. North Korea, Israel, Pakistan and India, which also have nuclear weapons, refrained from participating in the final vote. During negotiations, in October 2016, North Korea had voted for the treaty.

In advance of the Singapore Summit, dozens of Korean American organizations and allies signed a statement of unity, which says:

"Denuclearization of the Korean Peninsula means not only eliminating North Korea's nuclear weapons but also denuclearizing the land, air, and seas of the entire peninsula. This is not North Korea's obligation alone. South Korea and the United States, which has in the past introduced and deployed close to one thousand tactical nuclear weapons in the southern half of the peninsula, also need to take concrete steps to create a nuclear-free peninsula."

Prospects for Denuclearization on the Korean Peninsula

Related Topic(s): Agreement; Denuclearization; North Korea; North Korea And South Korea; Nukes, Add Tags
Add to My Group(s)
Go To Commenting
The views expressed herein are the sole responsibility of the author and do not necessarily reflect those of this website or its editors.