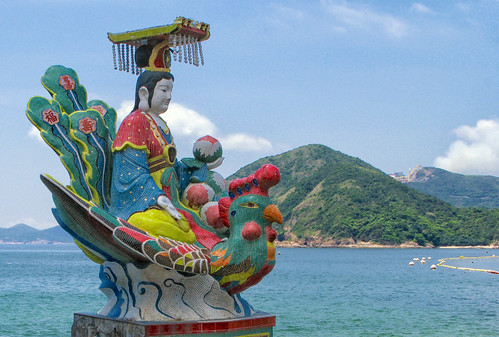 Mandate of Heaven
(Image by Ray in Manila)   Details   DMCA

It was 220 AD and Emperor Xian was having a bad year " a very bad year. For the past four centuries, his Han Dynasty had kept a fractious China united, maintained relative harmony and often outshone their European peers in the fields of art, astronomy, commerce and medicine. Historians refer to this dynastic period as the 'Golden Age'.

Towards the end, palace intrigue and official corruption was rotting the administration from the inside-out. Peasants and scholars formed religious clans which morphed into rebelling military units. Agitators (be they warlords or barbarians) attacked the fringes leading to border instability. The treasury was hurting as destitute farmers hid from tax collectors while elites didn't pay their fair share. Many rivers silted up, changed course and broke banks. That drowned nearby farms and villages bringing on rural famine and pestilence. As the situation deteriorated, the military marched in dethroning the last Han emperor and ending the dynasty.

Culturally this was a fitting end because, in ancient beliefs, the Imperial Chinese emperor's ethical character and principled behavior were expected to be his (or her " Empress Lu Zhi ruled for the Han) most coveted assets. If sitting rulers couldn't stave off floods & quakes plus keep the peace & prosperity then they must be out of step with expected moral codes and must face the consequences. This cosmic linkage between natural disasters and human conduct is known as 'Divine Retribution' or the 'Mandate of Heaven'.

Fast-forward 1800 years to America today. President Trump is having a bad year " a very bad year. His own court intrigue and personnel turnover (leading to embarrassing tell-all books) has put his leadership style and ethical character into question. His controversial taxation policies have enriched the 'Haves' much more than the 'Have-Nots'. Racial riots have messed with the peace & prosperity of our inner-cities. Religious extremists and nationalist militias are seeing a resurgence while outside agitators (be they Mexican immigrants or Russian hackers) supposedly conspire to interfere in our way of life. Sound familiar?

Moreover, this year alone has seen so much flooding that even Chicago is not safe, so many Gulf Coast storms that they ran out of alphabetized names and so many wildfires in California that the sky is orange. Of course, the biggest 'natural disaster' is the one-in-a-hundred-years pandemic. New CoViD-19 infections and fatalities are spiking abroad and seemingly never ended here just as the United States goes into its election. Their president even caught the disease after repeatedly minimizing the threat and ridiculing basic protections.

For a country supposedly still in its 'Golden Age', is all this simply bad luck, kismet, karma -or- a Divine Retribution where America's leader has now Lost the Mandate of Heaven?

Marc D. Johnson [MSgt, USAF-ret.] AS (Data Processing) from Ventura JC/CA BA (History) from Texas Lutheran/TX MPA (Masters Public Administration) from Troy U./AL 8926 Shady Hills, SA, TX 78254 | 210-334-1000 | MazzJohn@Yahoo.com I grew up (more...)
Related Topic(s): President Trump; Presidential Scholars, Add Tags
Add to My Group(s)
Go To Commenting
The views expressed herein are the sole responsibility of the author and do not necessarily reflect those of this website or its editors.