Reprinted from www.dailykos.com by Mark Sumner

New Zealand has a reputation unmatched beauty, adventurous, filled with eclectic animals, people concerned about the environment, and lots of sheep but despite its being on the far side of the world from the hotbeds of white nationalism, events on Friday morning showed that no nation is safe from the destructive power of murderous white radicals.

At least 49 people have died in an attack on two mosques in the city of Christchurch. Dozens more were wounded or otherwise injured. And there's absolutely no doubt about the cause of this sickening event. Because one of the killers livestreamed it to Facebook, while delivering a white-power manifesto about his hatred for "invaders." This does not appear to be the act of a "lone gunman," but a coordinated, planned slaughter staged to catch worshipers at their morning prayers. In addition to the alleged gunman, police have detained at least two others, and reports indicate that one of them was found with a number of explosive devices. Even the awful total so far may not have been close to what was intended in this racist attack.

White House press secretary Sarah Sanders has issued an official response, saying, "The United States strongly condemns the attack in Christchurch." And, of course, she provided New Zealanders with the same assistance that has so often been extended to American victims in similar mass-murders: "Our thoughts and prayers are with the victims and their families." What's not in Sander's statement is any hint about why this happened. Nothing about the hate for Muslims that she, her party, and especially her boss have carefully nurtured. Nothing about the global spread of white nationalism that has seen a rise of hate crimes across America and Europe.

This morning, Donald Trump finally followed up with a tweet providing "My warmest sympathy and best wishes," because apparently someone told him notto say thoughts and prayers. But what was the tweet that Trump delivered just before that one? While the shooting was underway, Trump was tweeting out a link to the nationalist outlet Breitbart. Before that was a tweet about how he was looking forward to vetoing the repeal of his emergency declaration so he could stop "Crime, Drugs, and Trafficking" from flowing into the United States. In other words " keep out the invaders.

Which is no coincidence. As part of his rant, the livestreaming shooter called Donald Trump a "symbol of white identity and common purpose."

Trump has deleted his tweet linking to Breitbart issued just after the shooting. 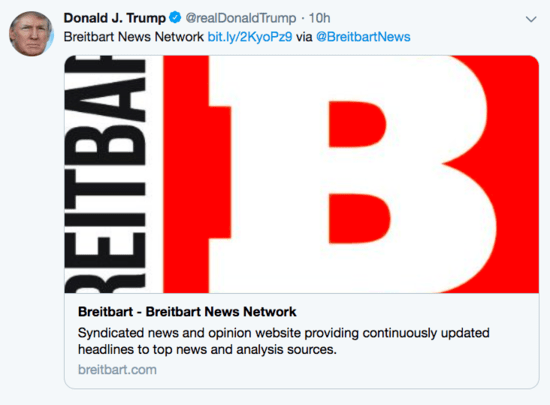 In a manifesto posted to social media (deliberately not linked), the New Zealand shooter frames his motivations around "replacement" the same term invoked by the Nazi marchers at Charlottesville that Trump described as "good people." The shooter went on to call immigration "white genocide."

Despite the location of the shooting, the United States is at the center of the manifesto. The shooter spends a great deal of his 74 pages talking about "threats to the electoral college" and his desire to "end the melting pot" by "balkanizing" the United States "along political, cultural and, most importantly, racial lines." In his rant, he repeats phrases and themes from both Trump and American white nationalists, focusing on the Second Amendment as a primary divide in American culture. The shooter also throws out other familiar right-wing phrases, from his concern that "taxation is theft" to his discussion of "demographic change" in Texas that will lead whites to start a civil war.

There is also a section on how to deal with immigration that seems to come from the Trump playbook: "Few parents, regardless of circumstance, will [be] willing to risk the lives of their children, no matter the economic incentives. Therefore, once we show them the risk of bringing their offspring to our soil, they will avoid our lands." One whole section of the manifesto is titled "Diversity is weakness."

The theme of dividing the U.S. along racial lines reoccurs repeatedly in the manifesto. The shooter states that he deliberately chose to use firearms rather than bombs specifically to create more anger over gun violence in hopes of spurring the fight over the Second Amendment and driving a wedge through America.

As the BBC reports, the entire nation of New Zealand is on heightened alert, and across Europe nations are sending extra security to protect mosques.

Related Topic(s): Donald Trump; Donald Trump Hate; Shooters; White Supremacist; White Terrorist, Add Tags
Add to My Group(s)
Go To Commenting
The views expressed herein are the sole responsibility of the author and do not necessarily reflect those of this website or its editors.