Click Here to Remove All Ads
Wilileaks strikes again: revealed cables on Haiti raise the giant question: Was General Bacellar murdered because he was not willing to turn MINUSTAH into a new version of the Tonton Macoutes?

From the Guardian UK : 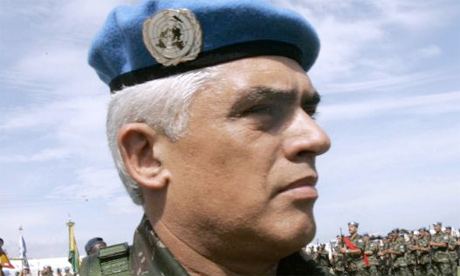 Minustah's commander, Brazilian Army General Urano Teixeira da Matta Bacellar, in Port-au-Prince, Haiti, 2005. In January 2006, Bacellar was found shot dead on his balcony, after what his government described first as a 'firearm accident' and then as 'suicide' (while seated reading a book.) Bacellar had earlier resisted calls to use his UN peacekeeping force to crack down on pro-Aristide rebels. Photograph: AP Photo/Ariana Cubillos

Less than a month after these meetings, on 5 July 2005, a browbeaten Heleno would lead Minustah's first deadly assault on the armed groups resisting the coup and occupation in Cite' Soleil. Attacking in the middle of the night with helicopters, tanks and ground troops, the Brazilian-led operation fired tens of thousands of bullets and dropped bombs, killing and wounding many dozens of innocent civilians, including children and infants.

Later that month, Heleno was cycled out of Minustah and replaced by 57-year-old General Urano Teixeira da Matta Bacellar. Like Heleno, Bacellar was reluctant to use force in Haiti's shanty towns. But pressure from Washington for "robust" action continued, and in late December 2005, "Bacellar had tense meetings with UN and coup regime officials and the rightwing business elite," reported the Haiti Action Committee at the time:

"They reportedly put 'intense pressure' on the general, 'demanding that he intervene brutally in Cite' Soleil,' according to AHP. This coincided with a pressure campaign by Chamber of Commerce head Reginald Boulos and sweatshop kingpin Andy Apaid, leader of Group 184 [the civic front that took part in the 2004 coup against Aristide]. Last week, Boulos and Apaid made strident calls in the media for a new UN crackdown on Cite' Soleil."

"We are going to intervene in the coming days," Valdès said. "I think there'll be collateral damage but we have to impose our force, there is no other way."

But some UN officials said that Bacellar "had opposed Valdès' plan", according to Reuters. "The general had insisted that his job was to defend the Haitian constitution, but not to fight crime," the Independent of 9 January reported.

Then, on 7 January 2006, General Bacellar was found dead in his suite at Pe'tionville's deluxe Montana Hotel, a bullet through his head. He had been sitting in a chair on his balcony, apparently reading. Initially, Brazilian army officials called the shooting a "firearm accident". After a few days, they changed the official verdict to "suicide".

Four days later, US State Department Deputy Assistant Secretary Patrick Duddy met with Dominican President Leonel Fernandez, who "inquired about the circumstances surrounding the death" of Bacellar, another WikiLeaks-released cable reveals. Duddy said that it looked like suicide, but "Fernandez expressed skepticism. He had met General Bacellar; to him, suicide seemed unlikely for a professional of Bacellar's caliber."

Fernandez suspected Bacellar had been assassinated by "a small group in Haiti dedicated to " creating chaos; [and] that this group had killed Minustah members in the past (a Canadian and a Jordanian, and now the Brazilian General) " The President said he knew of a case in which a Brazilian Minustah member had killed a sniper."

I am a student of history, religion, exoteric and esoteric, the Humanities in general and a tempered advocate for the ultimate manifestation of peace, justice and the unity of humankind through self-realization and mutual respect, although I am not (more...)
Related Topic(s): Haiti; Haiti Earthquake; Haitian Elections; Jean Bertrand Aristide; Minustah; Political Assassinations; US-Haiti Policy; Wikileaks; Wikileaks Reinventing Journalism, Add Tags
Add to My Group(s)
Go To Commenting
The views expressed herein are the sole responsibility of the author and do not necessarily reflect those of this website or its editors.