Tom Udall's recent interview on Santa Fe's local public radio station KSFR with Bill Dupuy, was very instructive as to how the New Mexico's democratic senator thinks about the recently filed suit by the Los Alamos Study Group versus the NNSA and DOE and what he furthermore said about the new CMRR-Nuclear Facility in Los Alamos is worth analyzing as well. While he says he is not trying to influence litigation he does note that litigation is expensive and cumbersome for all. In other words: he doesn't really like it.
Udall is still trying to figure out if official Washington would like to do another Environmental Impact Statement (EIS) and has written a letter to that effect to Dr Chu.
Well...I can answer that for him: no, Washington has made no gestures suggesting a new EIS, especially if that EIS is to be written before committing to the facility, as legally it must be. Instead the Obama administration has been pushing for this monstrosity called CMRR-NF as hard as they can.

A new EIS? For a project that has already in the paperwork stage absorbed 290 or so million dollars? Let me tell you: they are not jumping for joy at the prospect of a lawsuit, because they know that if the NEPA rules are the law of the land, they'll have to have a new EIS. Why ?
A project that costs 10 times as much as was projected at the time an EIS was done (2003), is a different animal all together than before. Currently costs are projected around 4 billion and going up. Nobody is sure what the final price tag will be.The way it is designed now it will take as much as 55 times the concrete that was originally projected and its foundations will go about twice as deep (125 feet).


The latest design concept for the facility is interesting: CMRR-NF is to be a nuclear weapons "hotel" --that is: we don't really know what or who it will host and what it will produce over time......the flexibility of the building's purpose is seen as a plus. "Grab the money, Build now, Deny everything, Think later" seems to be the motto. It is rapidly becoming another example of a mixture of Obama's misguided stimulus moneys for "Complex Revitalization", corporate cronyism (after all LANL is now highly privatized and part and parcel of the Bechtel Corporation), and an inexplicable worship of godfather Pete Dominici --all wrapped up together and poised to incarnate as a 4 billion dollar bunker on a earthquake fault-line "on the hill" in Los Alamos, New Mexico.
One can easily see the necessity of a new EIS by law. One can also easily see why the administration would like not to do one and has proceeded with its project, as if it makes no difference......
What is the political motive behind something so irrational and pompous and out of touch with the crying needs of our time? We have seen a lot of "natural" man-made disasters in the last few years, Katrina, flooding, fires and drought, oil gushers, more fires, landslides, earthquakes, dead zones, etc. etc. and mostly, despite individual heroism, we have been helpless in the face of them. Yet somehow the "nation" is to find comfort in the idea that we can inflict such man-made disasters anywhere in the world at a moments notice by dropping a tennis ball sized nuclear warhead core designed and built at the new 4 billion dollar CMRR-NFbuilding at LANL. 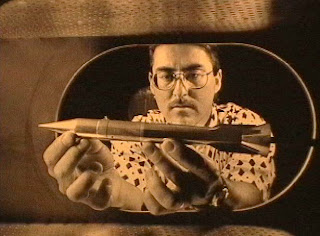 (Image by Unknown Owner)   Details   DMCA
Udall says that the main rational for the CMRR-NF behemoth is to modernize the nuclear weapons production establishment which would be in accordance with the Nuclear Posture Review (NPR) published this year. Udall also clarifies the relationship between the signing of the START Treaty and the CMRR-NF. It takes 67 votes to pass a treaty. So that means that one has to cater to the republicans and neocons and cajole them to sign a substantially meaningless new START treaty with Russia. The new START arguably reduces the arsenal (though here opinions are quite mixed....does this treaty really reduce the amounts of deployable warheads?), but at the same time allows the parties to modernize their arsenals. Despite heaped up praise through the Obama propaganda machine, New START is a pretty insignificant step towards a nuclear free world. Less warheads but more destructive (and accurate, etc.). In so many ways a meaningless treaty, also since both sides shortly after the signing of the treaty, made their own conditions for possibly leaving the treaty at some future date of their own choosing.

(Image by Unknown Owner)   Details   DMCA
So the latest rational for support from a senator like Udall is that a CMRR-Nuclear weapons Facility should be built, in order to gather votes for the New START disarmament treaty. Are we living in an Orwellian world yet?
Obviously we have a Faustian quid pro quo here...Udall thinks that he can get armament and disarmament, make peace with the peaceniks and build a new Nuclear Facility for new warheads.. As an existentialist I say: that is not serious...
It is correct for the Los Alamos Study Group to call for a new EIS. NEPA rules require the public and government agencies and native tribes alike to be apprised of LANL's vastly expanded plans for a CMRR- Nuclear Facility and its dramatic impact on the environment. Not having done so already is a violation and thanks to the LASG and their legal representation by Santa Fe attorney Thomas M. Hnasko this is coming to light. The public thus far has been largely kept in the dark about the tens of thousands cement trucks that will line the roads, or the disposal problems that come with 400.000 cubic yards of powdered volcanic ash, or the environmental impact of making three hundred and fifty thousand cubic yards of concrete. That last fact in itself --the production of that much concrete -- will emit over a 100.000 metric tons of CO2, which requires analysis of the project as a "Global Warming" source under the most recent guidelines. It is obvious that in so many ways the CMRR-Nuclear Facility is no longer a local issue.
With the lawsuit against the NNSA and DOE, holding the feet of Dr. Chu and Mr. Obama (and Mr. Udall) to the fire, the LASG clearly acts in the public's interests -- in the interest of "good governance'. We hope this lawsuit will give pause to these plans so all parties can re-consider what is at stake here.

Our time is one of declining resources. The government is running out of money. Real challenges like global warming, poverty, unemployment, and hunger, are much more threatening than any of the imagined problems that the CMRR-NF is intended to solve. It is time to come to our senses and make real choices about our future.
You can make a good start by supporting this important lawsuit demanding a halt to the CMRR-NF, a new EIS and accountability of the DOE, LANL and the NNSA: contribute generously to the Los Alamos Study Group here.


Disclaimer: Though all credit for following through on the LASG lawsuit goes to Greg Mello, head of the Los Alamos Study Group, I am proud to mention here that I also have been a long term director of the Study Group.

Willem Malten studied sociology and anthropology in Amsterdam. Afterwards Willem participated in the Tassajara Zen Monastery. In the last 25 years Since 1984 Willem has run the Cloud Cliff, a medium size bakery and restaurant in Santa Fe, and (more...)
Related Topic(s): Nuclear Disarmament; Nuclear Powers; Nuclear Proliferation; Nuclear Regulatory Commissionn; Nuclear Technology Theft; Nuclear WMD, Add Tags
Add to My Group(s)
Go To Commenting
The views expressed herein are the sole responsibility of the author and do not necessarily reflect those of this website or its editors.