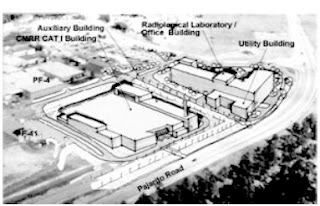 There is a new monument being built in New Mexico that will be on par with the Taj Mahal, as the spokeswoman of NM senator Jeff Bingaman announced. It is called the CMRR and it will be coming to our neighborhood soon in so many ways...
This project, gone largely unnoticed by the public and national media, would require 24.000 cement trucks to careen up "the hill" (Los Alamos) to dump their precious and carbon intensive rare cement earth mixtures to erect a very specialized edifice of worship, able to withstand a magnitude 7 earthquake right under its footings. Or an incoming missile for that matter.
Though its secretive mission seems to be a mystery to all, yet in a kind of religious frenzy no talent nor sacrifice will be spared for its creation. The initial costs were estimated to be about 600 million, but that was just a start. After consultation with the "higher priesthood' in Washington in concert with their corporate sponsors (Bechtel in particular) cost estimates have skyrocketed to about 4.5 billion going on 5 billion, outdating all previous NEPA studies and Environmental Impact Statements, -- and yet those costs may still just be a start. As of now that one LANL (Los Alamos National Laboratory) assembly is estimated to cost about 6 times the Golden Gate Bridge. Completion date is projected somewhere deep into the future -- opening not before 2022.

The exact role CMRR may play is veiled in the fog of Kafka-esque political maneuvering -- to hide its true purpose to commoners and nations alike. After all, it is meant to only serve a small elite of insiders, who can truly fathom the essence of its nihilistic Thanatos worship, and control its bitter fruits.
Once completed, the new building with the acronym CMRR (Chemistry Metallurgy Research Replacement )will be a blunt boxed monstrosity devoid of any imagination. Though, as I mentioned, compared by the spokeswoman of senator Jeff Bingaman to the Taj Mahal, it will actually be a basic bunker about 10 times the size of a large supermarket or 270.000 sq. feet. Mostly this space is taken up by large vaults, utilities ( no less than 71.500 sq. feet of utilities) and walls, but there remains a small inner sanctum for the priesthood of nuclear weapon development. About 8% of the total foot print or 22.500 sq. feet will be dedicated to highly secretive plutonium laboratories.

This stark isolation is meant to provide a conducive environment for a new generation of weaponeers, who are encouraged to do their black magic, and visualize new strategic uses for new designer nuclear weapons..... smaller, with multiple warheads and more accurate targeting, new delivery systems, deeper penetrating, etc., etc..
The CMRR is rapidly becoming the bargaining chip for signing on to the CTBT (Comprehensive Test Ban Treaty). What a terrible price to pay for a largely symbolic treaty, that already has been signed and endorsed by the chief executive branch (Clinton).
Obama's solemn declarations about a nuclear free world in Prague will soon begin to sound hollow. This late spring, during a fresh round of the NPT (Nuclear Non-Proliferation Treaty) hearings at the UN in New York, representatives from all over will start hearing about the newly planned CMRR,the largest new investment in nuclear weapons worldwide. American citizens too will start to question how come, in this time of restraint for most ordinary citizens, this time of pressing priorities of job creation, global warming and green conversion, etc. etc.....how come, the Nuclear Weapon Laboratory (LANL) can count on a 22 % budget increase, primarily to fund the CMRR? What is the logic?
Regardless the possibility of scaling down the quantities of weapons in the arsenal and regardless of the possible signing of the CTBT, the message that America sends with the construction of the CMRR is clear: the CMRR allows the production of new types of nuclear weapons through pit production of 80 up to a maximum capacity 200 per year . That is a clear message.The go-ahead of the CMRR building sends a strong signal about the depth of commitment the USA will have to a nuclear weapon future, where nuclear weapons will still be the very spear point of global super power. This is exactly what CMRR is intended to do militarily:spread fear and thus destabilize.
Locally for New Mexico, the enlarged and ever increasing scope and costs of the CMRR project requires a whole new NEPA study and environmental impact statement. New elements in the design have come forward that will impact the whole region, and haven't been examined properly or not at all. The climatological impact of CMRR will likely involve certain environmental laws that prohibit its progress.
Any political and diplomatic advantage that may come from building down the nuclear arsenal to let's say 311 nuclear warheads, as was recently proposed by some prominent US Air-force strategists, would dissipate in light of the very existence and capacity of the CMRR facility. Building the CMRR would not just damage the reputation of Obama, it would damage the credibility of the US and its role in the world. Perhaps most importantly, it would damage a growing military chorus that wants to adopt a strategy of increased security through non-proliferation, and a de-emphasis of the role of nuclear weapons. CMRR is the opposite of that approach. It is the incarnation of everything that is wrong with continued proliferation and the societal detriment and sacrifice that it brings. This will be a church to the "Idol of Hubris".
There is a whole host of questions surrounding the CMRR project, but most importantly, its mission itself needs to be clarified.
The tower of Babel, was never completed because the builders became so confused about its purpose that they could no longer understand each other. They became scattered all over.
That, I predict to you, is the most likely fate of the CMRR. It will never be completed......

Willem Malten studied sociology and anthropology in Amsterdam. Afterwards Willem participated in the Tassajara Zen Monastery. In the last 25 years Since 1984 Willem has run the Cloud Cliff, a medium size bakery and restaurant in Santa Fe, and (more...)
Related Topic(s): Future; Los Alamos; Military; Plutonium; Power; Start; Time; Undervotes, Add Tags
Add to My Group(s)
Go To Commenting
The views expressed herein are the sole responsibility of the author and do not necessarily reflect those of this website or its editors.