Napoleon once remarked, "The policies of the rising continental powers are inherent in their geography." This maxim divulges the relevance of the geo-strategic location, which gives birth to the politico-diplomatic as well as politico-military engagements both regionally and internationally. The diplomatic offensives, given the ongoing century when imperialistic encroachments are seen as less attractive, nevertheless the globalizational initiatives like trade and investment are seen as much dedicated, appear to be worth mentioning in the international relations. 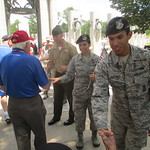 Analyzing India's diplomacy under the Modi's premiership, rationales believe that New Delhi is supposed to overcome certain diplomatic milestones, out of which relations with neighbors await for much expectations in order to keep its economic development alive.

Narendra Modi during the election campaign reiterated the rhetoric that once he is elected, the meltdown in the economic growth rate, which was worth mentioning in 2010-2011, would be restored. This GDP dismay cannot be mitigated particularly when it embroils with neighbors. Simply, India's internal stability is associated with the fraternal relations with the neighbors.

On part of the normal relations in region, Pakistan and China stand as the foremost giants where India has to step up carefully. Entailing in jingoism in matter of Indo-Pak relations has given nothing to both sides except the consumption of mega resources in the spectrum of defense and security. Thus, the normality is the sole way to live as peaceful. For the purpose, the composite dialogue process in case of disputes with Pakistan is to be reviewed. It should be put to the new course. In his statement in Islamabad, Sartaj Aziz, Adviser to PM, stressed that the peace agenda should be revised.

He also avowed that the two premiers during Nawaz Sharif's visit to New Delhi agreed upon the bilateral agenda to be carried out. He highlighted that the thinking on both sides are prevailing to revamp the peace talks, which were on halt in wake of the skirmishes undertaken early in 2013 alongside the LOC (Line of Control).

Certainly, these dialogues are considerable mechanisms, likely to be jointly pursued in an endeavor to defuse the bones of contentions including Kashmir, peace and security such as CBMs, Siachen, Sir Creek, Wullar Barrage project, Tulbul Navigation project, terrorism and drug trafficking. These aspirations should also be laced with economic cooperation and promotion of friendly exchanges.

The said diplomatic exchanges are the encouraging happenings between the two sides. During Nawaz Sharif's vi sit, Narendra Modi raised the issue of Mumbai attack. He was assured that the dialogue and mutual discussion was an instrument for the solution. Accordingly, the Sharif's invitation to Modi in a telephonic call for visiting Pakistan is impressive. Parallelly, during this precise telephonic conversation, latter confessed that poverty is like a plague prevailing on both sides. Therefore, conscience for mutual dialogue for solution of the existing disputes predicts that the current elected government in India would be conducive for the two countries to work together.

Second important factor in regional neighborhood where India has to show maturity is China. In fact, India shares the mis-perceived relations with Beijing since 1957 when Dalai Lama was hosted in India and a government of Tibet was labored in exile. The two countries have engaged into in bloody war in 1962. Still in the ongoing decade of 21st century, the pessimism by all counts is the misfortune in the Sino-India relations.

If the Indian government is not channelized by Narendra Modi to find out the idealistic approaches, the animosity will aggravate the economic stability in India. On the other hand, Robert D. Kaplan believes that China and India are destined by geography to be rivals. Essentially, the adjacent geography has placed them as potential adversaries due to the realistic approaches in the international order. Therefore, the idealism and aspirations for co-existence are the measures to let each other prosper. Recently, a little progress in this regard is seen to have been made when foreign ministers of the two neighbors met and discussed all perennials of the issues including border issues and economic ties.

In the meeting, the Chinese FM lauded the Indian inclination towards the ancient civilization. He also highlighted the commonalities between the two countries. According to Mr. Wang, China welcomes the development of India; China supports the development of India and is ready to engage with the new government of India. Similarly, the Indian Foreign Minister, Shusma Sawaraj, expressed the words of cordiality and said, "China is a neighbor with whom we share a long border. Our neighborhood as you are aware is a major focus of the government's diplomatic engagement. China is also a major economy and our bilateral economic ties are of a significant magnitude."

This shows the significance of the fraternal relations that two sides fathom. However, it should be pre-requisite of the policies of the newly elected and highly mandated Indian government that all issues must be discussed in mutual dialogue. Through discussion and peace talks, the glaring disputes could acutely be defused. This would give birth to the promising future of the Asian neighbors.

Related Topic(s): Narendra Modi, Add Tags
Add to My Group(s)
Go To Commenting
The views expressed herein are the sole responsibility of the author and do not necessarily reflect those of this website or its editors.