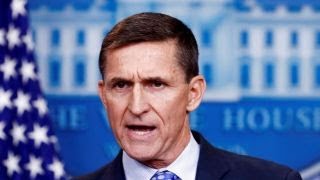 Two days ago, the special counsel investigating Russian influence on the Trump campaign submitted a sentencing memo urging leniency for a cooperating witness, former national security adviser Mike Flynn, and the press is, not surprisingly, leaving out the Israel angle.

Flynn's confessed crime was lying to the FBI about his acting at Israel's behest in December 2016 to call the Russian ambassador to ask him to veto a Security Council resolution against Israeli settlements that Obama as a lame duck was about to abstain on.

The Russians didn't play ball, the resolution went through as the last act of the Obama administration on Israel. Five years before Obama had vetoed a similar resolution, when he was seeking a second term.

CNN didn't touch the Israel angle. NPR left it out yesterday. Left it out again today talking to Mike Isikoff. Particularly egregious is a New York Times editorial on the Flynn sentencing documents in which Russia is mentioned again and again, but the reference to Israel is completely oblique. Just "Obama administration policy in the Middle East."

"As lawyers for [special counsel Robert] Mueller's office noted in their sentencing submission, Mr. Flynn's crime was 'serious.' On several occasions during a fateful interview at the White House just days into the new administration, the former national security adviser lied to F.B.I. agents about his contacts during the transition with the former Russian ambassador. Mr. Flynn and the ambassador, Sergey Kislyak, discussed ways to undercut Obama administration policy in the Middle East and toward Russia. We do not yet know whether Mr. Flynn, a former Army lieutenant general and director of the Defense Intelligence Agency, did this on his own initiative or on orders from Mr. Trump or someone close to him."

As we've repeatedly stated, the Michael Flynn Russian influence story is also a story of Israeli influence. Gareth Porter says so too:

"The big story about Flynn's guilty plea and cooperation with #Mueller that big media has predictably downplayed is that Kushner ordered Flynn to contact the Russian Ambassador on behalf of #Israel to get Russia not to vote for an anti-Israel UNSC resolution."

But the Israeli press is clear that Israel was behind Flynn's action. "Flynn Got in Trouble Over Israel UN Vote and Became Asset for Russia Probe," Haaretz headlines its story. It says that Israeli officials asked Trump to try to intervene.

"Despite no mention in the document, the Trump team's decision to contact Russia was made following requests by senior Israeli officials that they try to intervene."

Gosh, here's more of Israel's presence in the Russia probe. Vanity Fair has a column noting that Israel played a role in former Trump campaign aide George Papadopoulos's decision to cooperate with Mueller.

"Papadopoulos has told people he pleaded guilty to perjury because Mueller was threatening to prosecute him as an unregistered agent of Israel."

Evidently, Papadoupoulos had been at the neoconservative Hudson Institute when he worked on energy issues involving Israel,the Washington Post reported.

"He... attended a series of energy conferences in Israel, including one held in April 2016, just days after he was named to Trump's campaign, according to Israeli media accounts.

Philip Weiss is a longtime writer and journalist in New York. He co-edits a website on Israel/Palestine, Mondoweiss.net, which he founded in order to foster the movement for greater fairness and justice for Palestinians in American foreign policy. He is currently working on a novel about the US in Australia during WW2.
Related Topic(s): Headlines; Isikoff; Israel; Israel Firsters; Israel Runs Washington; Israeli Pressure On US, Add Tags
Add to My Group(s)
Go To Commenting
The views expressed herein are the sole responsibility of the author and do not necessarily reflect those of this website or its editors.