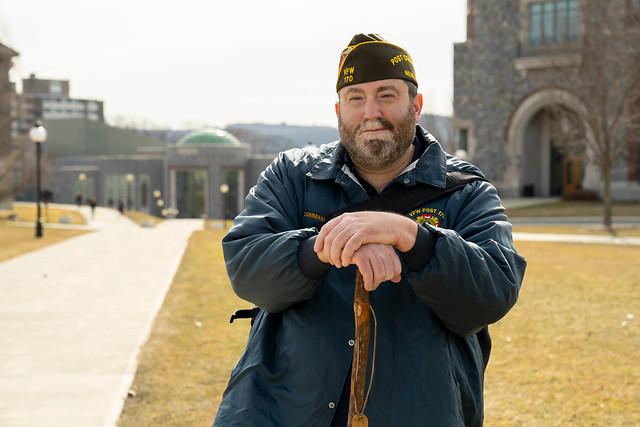 That's how many veterans on average commit suicide in the United States every day.

It's also the number of miles Navy veteran Thomas Zurhellen plans to walk each day on a trek across the country from Portland, Ore. to Poughkeepsie, NY to raise awareness of veteran suicides and homelessness.

Zurhellen began his nearly 3,000-mile journey Monday deliberately without a tent or advanced plans of where he is to spend each night so he can experience what millions of homeless veterans endure.

A Marist College English professor currently on sabbatical, Zurhellen originally envisioned spending his time off writing his fourth book, "all ready to just take it easy and write a nice novel and drink a lot of coffee, maybe go on some trips."

Then he was named commander of Poughkeepsie's Veterans of Foreign Wars (VFW) Post 170, and his association with so many fellow veterans changed his perspective.

Of his year serving as commander, Zurhellen stated:

"This past year, pretty much every day I have been confronted with a veteran who needs help. We can't help all of them just being the VFW, so we wanted to raise awareness to the community and to the nation that we all need to take care of these problems."

"I've seen first-hand the significant problems facing our veterans today, especially our younger veterans returning from Iraq and Afghanistan. Most folks don't fully realize the extent of serious issues like suicide and homelessness affecting our returning heroes. Our goal should be zero: zero veteran suicides and zero veteran homelessness. We simply need to do a better job of taking care of our veterans."

Along the way, in addition to relying on others' generosity, Zurhellen intends to visit fellow VFW posts.

Zurhellen mapped a route that will take him to or near Boise, Idaho; Casper, Wyoming; Sioux City, Iowa; Milwaukee, Wisconsin; Flint, Michigan; and Buffalo, New York.

Related Topic(s): Awareness; Donations; Gofundme; Heroes; Homelessness; Suicide; Veterans; Veterans Admin VA, Add Tags
Add to My Group(s)
Go To Commenting
The views expressed herein are the sole responsibility of the author and do not necessarily reflect those of this website or its editors.