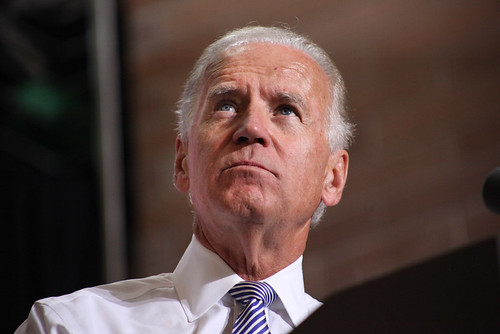 We are in the battle for the soul of this nation". But if we give Donald Trump eight years in the White House, he will forever and fundamentally alter the character of this nation, who we are, and I cannot stand by and watch that happen.

Biden's candidacy announcement video is an elaborate exercise in false consciousness, opening with a misleading invocation of the Declaration of Independence. He never mentions the Constitution. The video segues into a shameless bit of soulless exploitation, manipulation, and misrepresentation of the racial events in Charlottesville in 2017. The portentous music, together with Biden's funereal tone, work hard to create the sense that there was meaning and substance where there was neither. Biden can only fake gravitas. He goes on and on about "American values" and "who we are" without naming a specific value or saying who he thinks we are. This is political pandering in the form of a Rorschach blot. This is crude demagoguery that boils down to an appeal to elect a familiar under-achiever just because he's NOT Trump.

Last time anyone looked, ALL the candidates were NOT Trump. And a good many of them actually stand for both articulated values and thought-out policies to put them into practice.

Most of Biden's career has been spent standing by and letting things happen, things that attest to the historic character of "who we are," but are anywhere from not admirable to despicable. Biden's announcement video suggests that Biden would promote racial healing. He never has before, why would anyone believe he could now?

Trump calls Biden "Sleepy Joe." That's actually a compliment in the context of his record. "Sloppy Joe" would be more apt. Trump grabs women by the p*ssy, Biden grabs women by the shoulders. There's a difference, but they're both grabbers. Maybe the most realistic thing to call him is "Creepy Joe."

In reality, Biden has been horrendously awake and active on the wrong side of too many issues. Here are some of them, unranked.

Biden actively supports the Afghanistan War and always has. He supports drone strikes and CIA-trained death squads without any apparent concern for civilians maimed and killed.

Biden has advocated a non-specific "military solution" for Syria, but not recently.

Biden's son Hunter had lucrative interests in Ukraine that were under investigation by Ukraine's top prosecutor. Biden has boasted of leaning on Ukraine president Poroshenko, who fired the prosecutor.

Biden backed the aggressive and deceitful eastern expansion of NATO, knowing it would likely lead to unnecessary confrontation with Russia.

Biden has long supported tax cuts for the rich.

Vermonter living in Woodstock: elected to five terms (served 20 years) as side judge (sitting in Superior, Family, and Small Claims Courts); public radio producer, "The Panther Program" -- nationally distributed, three albums (at CD Baby), some (more...)
Related Topic(s): Injustice; Issues; Joe Biden; Policies; Rights; Video, Add Tags
Add to My Group(s)
Go To Commenting
The views expressed herein are the sole responsibility of the author and do not necessarily reflect those of this website or its editors.