Srebrenica Historical Project: A sordid chapter in the life of the Hague Tribunal, revisited:

The June 2005 showing of an inflammatory, prejudicial and irregularly acquired execution video during a court session at the Hague Tribunal illustrates the fundamental irregularity of the court itself. It also corroborates the assessment of the Hague Tribunal in our new video, appropriately entitled The Rogue Tribunal. 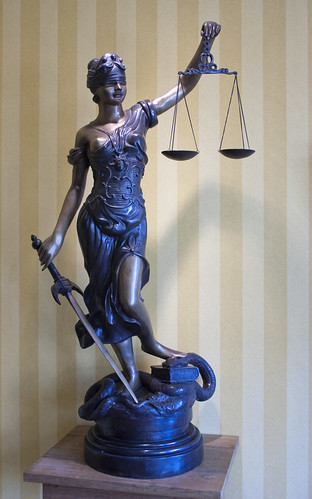 The introduction by the prosecution on June 1, 2005, during the trial of Slobodan Milošević, of a video showing the purported execution of six individuals had huge media resonance. The history of this episode is rather curious. It was "evidence" not formally introduced as such at the trial but slipped into the proceedings on a specious pretext. Yet its prejudicial impact was considerable because it reinforced the public's perception not only of the defendant's guilt, but also of his government's and his country's complicity in the commission of the genocide, with which he was being charged.

The controversial execution video was screened by prosecutor Jeffrey Nice in the Kosovo phase of Milošević's trial, i.e. a segment of the proceedings that had no direct link to Srebrenica. The witness taking the stand was Obrad Stevanović. Prosecutor Nice asked the witness if he knew a Serbian Interior Ministry officer by the name of Slobodan Medić, which the witness denied. The prosecutor then introduced the execution video which he said had been made in the area of Trnovo [at a distance of about 160 km from Srebrenica] where Medić supposedly appears. The exercise was allegedly an attempt to jar the witness' memory.

The witness protested: "I am astonished that you have played this video in connection with my testimony because you know full well that this has nothing to do with me or the units I commanded," to no avail. [Prosecutor v. Milosevic, Transcript, p. 40279] Amicus curiae Steven Kay observed quite vehemently that "[w]e haven't established any foundation for this. To my mind, this looks like sensationalism. There are no questions directed to the witness on the content of that film in a way that he can deal with it. It's merely been a presentation by the Prosecution of some sort of material they have in their possession that has not been disclosed to us and then it has been shown for the public viewing without any question attached to it. It's entire sensationalism. It's not cross-examination," again to no avail. [Ibid., Transcript, p. 40278]

Apparently taken aback, even presiding judge Robinson mildly reproved the prosecutor: "Mr. Nice, there is some merit in that. That's why I asked what are we going to be told about the film. Who made it, in what circumstances, and what questions are you putting to the witness in relation to it?" [Ibid., Transcript, p. 40278] Prosecutor Nice condescendingly promised to answer those questions "to a degree" [ibid.]. But the presiding judge took no further action to strike the improperly introduced item.

In the event, the execution video came to be viewed by the chamber and, since it was immediately released publicly, by a world-wide audience as well. The initial pretext for showing it, identification of a certain individual who allegedly appears in it, was quickly forgotten and attention was shifted to the murders portrayed in it. The identification could have been accomplished by screening just a few frames with the target individual. Instead, the entire video of indeterminate provenance was played, betraying the inflammatory and propagandistic purpose of the prosecutor's stratagem.

The media had a field day uncritically conveying as established facts the prosecutor's untested claims that the victims were Bosnian Muslims, that they were from Srebrenica, and that the apparent executioners were officers of the Serbian Interior Ministry, none of which was self-evident from the video, apart from prosecutor Nice's solicitous guidance [here, here and here]. Some information about how ICTY Prosecution acquired the video ultimately emerged: it was furnished by the Western-financed Belgrade NGO "Humanitarian Law Center" and its controversial director, Nataša Kandić.

The Trnovo execution video affair was thoroughly and competently dissected by independent analysts such as Jared Israel [here and here]. Israel rightly points out the preposterous nature of the entire scheme as presented by the Hague Tribunal prosecution. Trucking six prisoners to an area 160 km away to be executed in order to conceal the mass murder of 8,000 makes no sense and implausibly leaves 7,994 behind, still subject to exposure. Israel's explanation for the prosecution's zeal to shift the location of Srebrenica burial sites to the Treskavica area makes eminent sense:

"I have a theory that may explain why prosecutor Nice was told to spin this crazy horror story about shipping truckloads of Muslims to Treskavica Mountain. I've been studying battle reports. From April to July 1995, the reports indicate that thousands of fighters especially Muslims were killed in and around Treskavica Mountain. After battles it is standard practice to bury the dead, sometimes in mass graves, in order to clean up the battle field. So there are many graves, big and small, all over the Treskavica area. In ten years time, NATO and the Hague have been unable to produce and identity the bodies of anywhere near the 8000 Muslims they claim died in Srebrenica. Those bodies they have produced are easily explained by the fact that a) Muslim commander Nasir Oric is on record boasting of all the Serbian civilians he butchered in villages around Srebrenica and b) a couple of thousand Muslim troops died trying to fight their way through Serbian lines after Srebrenica fell. Much of this fighting took place in villages previously turned into ghost towns by Nasir Oric."

But there is, of course, another and even more pointed aspect to the execution video affair. Why would the ICTY prosecutor resort to sordid subterfuges to introduce highly irregular evidence for its shock value and predictable media echo if he had solid proof to back up his version of what happened in Srebrenica?

Related Topic(s): Bombing; Hague; Military; Srebrenica; Tribunal, Add Tags
Add to My Group(s)
Go To Commenting
The views expressed herein are the sole responsibility of the author and do not necessarily reflect those of this website or its editors.