As the U.S. stubbornly clings to its de-facto support of Mubarak by continuing military aid even while issuing beautiful words of support for democracy, the war of attrition on peaceful protesters continues.  NPR reports 5,000 injured last night and today as attacks continue to be portrayed as "clashes" between "pro-Mubarak" demonstrators rather than what they are: attacks by government-paid thugs and out-of-uniform security forces, backed by snipers who are dropping protesters from a distance and thugs pulling organizers out of the crowds.

Last night a BBC interviewer did her dirty work laughably, interviewing the man who has become the equivalent of Mubarak's Joe Plumber, who says he participated in the protests before, but after hearing Mubarak's speech joined the "counter-demonstrators."  "Did you switch to Mubarak because he is the best president or because if he left, there would be chaos?" she asked, paraphrasing Mubarak's latest line and proof that he is utterly and totally insane.  "I support the president now because there will be chaos if he leaves."  It was the most artless performance by purported interviewer and interviewee I have ever heard.

Elements in the media are still committed to making the "spontaneous chaos" meme stick.  In contrast NPR's Terry Gross managed to elicit a startling frankness from a former officer of the Egyptian army, who unwittingly let loose the game plan.  This man saw a "Nixon model" of Mubarak's exit, as Gross labeled it in exasperation, in which he would be pardoned before exile and then "appreciated for his service to the nation" down the road.   The former officer then predicted that in a few days time the war of attrition would reach a point where protesters began running out of food and water, and true chaos would begin in earnest, rather than the manufactured kind.

This will be the army's - which has implicitly chosen a side by not stopping the violence against the protesters - excuse to justify a crackdown to clear the streets, and give Mubarak an opening to hang on for whatever next phase his psychosis dictates.  Perhaps announcing that he will stand for election after all.  If you doubt this scenario I ask you one question: is there anything you would put past this man?

It is well known that top generals in the Egyptian military were meeting with their Washington counterparts at the Pentagon two weeks ago.   Now we know what they were talking about.  All you guys have to do is stand down until the right time.  Easy.  Others will do the rest.

In the meantime the noises about cutting off military aid in order to send the clear, unambiguous message of whose side the US is now on are increasing in volume, but not fast enough.  Senator Leahy, Chair of Foreign Operations, said "that is a pipeline that is easy to close."  But as of today, it remains open.

Why do days matter? Because as Obama continues to play footsie with the dictator, last night and today NPR reports another 5,000 people injured, who knows how many killed.

The organized campaign of violence and random terror against these brave people in their bid for freedom, stopping just short of mass round-ups and a bloodbath, continues, all part of the plan.  They are not backing down, they have been tortured enough, and their bravery and determination is heartbreaking.  There is talk of "entering negotiations" for "Days of Leaving," but a few days is all they need.   The world sees what is happening.  Obama turns his handsome head away, and seems not to.

Members of Senate Subcommittee on State, Foreign Operations, and Related Programs, which must approve appropriations to Mubarak government: 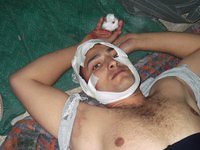 Related Topic(s): Egypt; Egypt; Egyptian Revolution, Add Tags
Add to My Group(s)
Go To Commenting
The views expressed herein are the sole responsibility of the author and do not necessarily reflect those of this website or its editors.