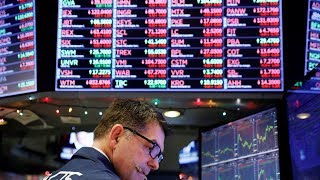 The media continue to be in a panic over the drop in the stock market over the last few weeks. Fortunately for political pundits, there is no expectation that they have any clue about the subjects on which they opine. For those more interested in economics than hysterics, the drop in the market is not a big deal.

The market is at best very loosely related to the economy. It generally rises in recoveries and falls in recessions, but it also has all sorts of movements that are not obviously related to anything in the real economy.

The most famous example of such an erratic movement was the crash in October of 1987. The market fell by more than 20 percent in a single day. There was no obvious event in the economy or politics that explained this fall, which hit markets around the world. Nor did the decline presage a recession. The economy continued to grow at a healthy pace through 1988 and 1989. It didn't fall into a recession until June of 1990, more than two years later.

There is little reason to believe the recent decline will have any larger impact on the economy than the 1987 crash. As a practical matter, stock prices have almost no impact on investment. The bubble of the late 1990s was the major exception, when companies were directly issuing stock to finance investment.

Stock prices do affect consumption through the wealth effect, but the recent decline is not large enough to have all that much impact. Also, since it was just reversing a sharp run-up in the prior 18 months, it essentially means that we will not see some of the positive wealth effect that the economy would have felt otherwise.

Basically, the hysteria over the drop in the stock market is either people in the media displaying their ignorance or a political swipe at Donald Trump by people who apparently don't think there are substantive reasons to criticize him. This drop is not the sort of thing that serious people should concern themselves with.

Wealth Inequality and the Stock Market

Anyhow, it is not really plausible to tell a story where rises in housing wealth will allow the middle class to reduce the wealth gap in the context of a rapidly rising stock market. It is also not plausible to tell a story of the wealth gap closing appreciably due to increased savings by low and middle class families. Suppose the bottom 100 million families increased their annual savings by $5,000. This would be a huge increase. After three years they will have accumulated another $1.5 trillion in savings. In a context where total wealth is near $100 trillion, this is barely a drop in the bucket.

I have argued elsewhere that wealth is really not a very useful measure, but those who think it is have an obligation to be consistent. The long and short, is that you get to either complain about wealth inequality or a falling stock market. You don't get to complain about both.

The Stock Plunge and Stock Returns

Much of the commentary on the drop in the stock market ignores its absolute levels. In spite of the drop, the price to earnings ratio for the stock market as a whole is still close to 20 to 1. This compares to a long-run average of close to 15 to 1. And, it is important to remember that corporate profits remain at extraordinarily high levels as a share of GDP. It is reasonable to think that a tight labor market will allow workers to get back some of the income share they lost in the weak labor market following the Great Recession. We may also hope that a Democratic Congress, and possibly a Democrat in the White House in 2021, will retake some of the tax cut that Trump gave to U.S. corporations last year.

Dr. Dean Baker is a macroeconomist and Co-Director of the Center for Economic and Policy Research in Washington, D.C. He previously worked as a senior economist at the Economic Policy Institute and an assistant professor at Bucknell University. (more...)
Related Topic(s): Economics; Inequality; Market Manipulation; Panic; Stock Market- Investing; Stock Sell-off, Add Tags
Add to My Group(s)
Go To Commenting
The views expressed herein are the sole responsibility of the author and do not necessarily reflect those of this website or its editors.