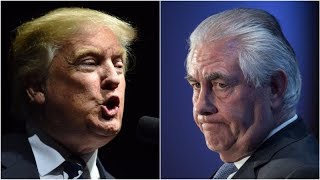 To: Rex Tillerson
From: Robert Reich
Subject: The Moron

I can understand why you feel Washington is a place of "petty nonsense," as you said Wednesday when you called a news conference to rebut charges that you called Trump a moron last summer after a meeting of national security officials at the Pentagon.

But you're right: There are far more important issues than the epithet you likely used to describe your boss.

On the other hand, your calling him a moron wouldn't itself have mushroomed into a headline issue -- even in petty Washington -- if there weren't deep concerns about the President's state of mind to begin with.

The reason your moronic comment about Trump made the headlines is that Trump really is a moron, in the sense you probably meant it: He's impulsive, mercurial, often cruel, and pathologically narcissistic. Some psychologists who have studied his behavior have concluded he's a sociopath.

Washington is petty, but it's not nonsensical. It latches on to gaffes only when they reveal something important. As journalist Michael Kinsley once said, "A gaffe is when a politician tells the truth -- some obvious truth he isn't supposed to say."

Face it. You are Secretary of State -- the nation's chief diplomat -- under a president who's dangerously nuts.

Last weekend, for example, Trump publicly said you were wasting your time trying to open talks with North Korea. Does he have a better idea? Any halfway rational president would ask his Secretary of State to try to talk with Kim Jong-Un.

And there's Iran. You and Defense Secretary James Mattis have both stated the nuclear agreement should be retained. That, too, is only rational. The International Atomic Energy Agency says Iran has been honoring the agreement. Without it, Iran would restart its nuclear program.

But Trump is on the verge of decertifying the agreement in order to save face (in the 2016 campaign he called it an "embarrassment to America") and further puncture Barack Obama's legacy. His narcissism is endangering the world.

You tried to mediate the dispute between Qatar and its Arab neighbors. That, too, was the reasonable thing to do.

But then Trump and his son-in-law Jared Kushner sided with the United Arab Emirates, where they have business interests. Less than one hour after you called for a "calm and thoughtful dialogue" between Qatar and its neighbors, Trump blasted Qatar for financing terrorism. That was also nuts.

Related Topic(s): Health- Mental-Sociopath-Narcissism; Memo; Rex Tillerson; Trump Moron, Add Tags
Add to My Group(s)
Go To Commenting
The views expressed herein are the sole responsibility of the author and do not necessarily reflect those of this website or its editors.