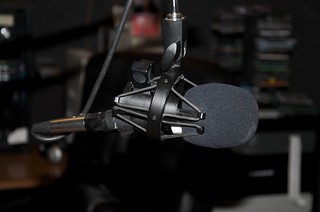 The Media has a microphone and a responsibility.
(Image by Orest U)   Details   DMCA

"Even if development were possible between the social sectors, will it be acceptable to other general public and of course, I almost forgot, the media ? Do the other people have any pragmatic points or issues or commitments or stands for "development" with both the journalism and media sectors? What are they going to give to the people and what are they willing to take?

Have they made any approach or even contacts with the people to explore the possibility of this "development"? And if they have, then have they granted the "freedom of information" to the people and the world at large? Many of us who have haven't lost all hope have, as we well know already, do not lost hope and many have committed development agendas. Rate of such incidents have risen and hard work is the only thing we may have to sustain us. But those high and mighty who just demand, keep saying "should" "must" and display their unique wisdom by doing concrete, do contribute in developing with hope of those who have been working the consequences of economic freedom. Yet lets keep hoping that things will be better. That is what the people I have met are doing, now. Dr. Raman Raj argued with me.

"I am in no position to tell what the immediate role of the media "should" be. Further, I fail to understand which media we are referring to, the group media, the other partisan media, or other types of media? Well, they are taking the role that they have decided for economic agendas. They need no prescription. But just because we asked, I would repeat what I had said before, that is if media could just promote freedom and democracy, we maybe blessed with some pragmatic direction and condition for development. This is my thinking". He said.

We must be particularly grateful to the media for their concern, focused in our conditions and presumably, the advocates of democracy have by the media of known all along that things like "freedom of speech", freedom to assemble, freedom to pursue ones economic occupations, freedom to live, freedom from any types of intimidation and coercion etc .

We are grateful to them that this "subjects" only in the conditions has suddenly been changed , by only those very institutions that have provided relative security and protection to us. If we could just get rid of our negative thinking, we would surely enjoy the life with economic security like those of us have enjoyed it since long time. This will surely bring development of mind to those wining for love of " economic development".

We are also grateful to the media people for making us aware that demands for stories and news should be made only from those who are taking decisions to address our crises and not of course from those who have been leading us into confrontation since as well as those who are finding new ways and means for yet more stability.As for the like us, who have to suffer the consequences of reality of poverty, we do not know what this "crisis" that we allude to is.

Globally, people have been in crisis and more intensely so since long time. People know that a new type of decisions have been taken. They are still trying to figure out what it means to them, lives,security, and economic uncertainty. This decision, we believe is a reaction to and an attempt to address the crisis that people have been facing since a decade. The series of crises that some have described as leading them towards "becoming a responsible media".certainty prevails.

It is too early to make any judgment. We still have to wait for likely trend that maybe after some time.We are more concerned with results and how it affects our lives our economy and our future. One has to wait some time yet, to see the type of results that the media brings. But if the hopes and the current situations is any indication of actual reality, people may add yet another series and types of development, that presumably will be according to the "economic freedom" displayed by our media personnel and this no doubt will make people free from worry and dejection.

Is there any economic revolution going on, that people are unaware of ? If there were, there would have been grounds for hope, wouldn't it be? Just to development depends on the desire of those who started the development and only secondly on those who aren't opposing them. Further development must include,and what maybe the things to bring about? Information are easy to obtain. So frankly I know what to believe.

The media and radios have been broadcasting to protect economic reforms. So now they do not only provide entertainment. Some thousands of media persons are said to be not idle specially those posted in the different areas and who are writing continuously.