Does reality matter any more? Have media echo chambers come to define a different truth for every cell phone, and we've become so inured to the idea that my reality is different from your reality that we nod quietly and move on?

I was at Harvard in the spring of 1968 when Martin Luther King was assassinated. There were Marxist theorists teaching history and there were SDS radicals chanting "Ho, Ho, Ho Chi Minh! NLF is gonna win!". But there was no one to tell me, "You know -- it wasn't James Earl Ray that killed him; it was J. Edgar Hoover."

Two months later, Bobby Kennedy was shot from behind by a gun held right up against his right ear, while Sirhan Sirhan fired wildly from in front of him. RFK had lived in the same dorm where I was living, and had graduated from Harvard just 20 years earlier. No one told me, "Sirhan was hypnotized for this occasion by MK-Ultra. The real assassin is Allen Dulles, who killed his brother 5 years ago, and who knows his goose is cooked if Bobby makes it to the White House."

We had good reasons to oppose the war in Vietnam, but one of the best reasons was that the war was initiated on a lie called the Gulf of Tonkin Incident. No one talked about that, either, and of course, I had never heard the term "false flag".

Last weekened, I was at an antiwar rally in DC, with inspiring speeches from Medea Benjamin and Cindy Sheehan. Every shade of gay, straight, black, brown, and indigenous was represented on the stage. We railed against imperialism, against capitalism, against drone strikes and regime change wars. But no one reminded us that Dick Cheney and Donald Rumsfeld had staged 9/11 as an excuse to pass the Patriot Act and initiate a War on Terror.

It seems to me that we're fighting with one hand tied behind our backs. We arguing our politics and our ideology from theirfact base. Wouldn't it advance our cause to broadcast the fact that 9/11 was an inside job? Or that the Shrub was not really elected president either in 2004 or in 2000? Or that the only two Senators to vote against the Patriot Act received envelopes in the mail with a strain of anthrax that was traced to a US Army bioweapons lab in Bethesda? Or that Paul Wellstone, a charismatic Senator with a commitment to peace and a presidential aspiration was murdered just days before the 2002 election when his plane was shot down by our own CIA?

Would it help our cause if people knew that our annual Defense Budget--already bigger than the next 15 countries combined--is actually the tip of the iceberg, and the Pentagon's black budget, unauthorized, unreported, unaccountable, is really three or four times that big?

Noam Chomsky is the Left's most extreme example. His perspective is solidly left, and what is more, he does deep background studies of just about everything he writes or talks about. What are we to make of the fact that he persists in denying the obvious when it comes to the Kennedy assassinations and the collapse of Building 7?

I think it's probably true that in the short run, trumpeting these genuine but unpopular facts subjects us to the dreaded label, "conspiracy theorist", with all the marginalization and ridicule that implies. But in the long run, holding on to a lie exacts a cost from us, and the cost is so much the higher when it is someone else's lie.

Peace activists work closely with civil rights activists and proponents of economic justice share the stage with environmentalists and conservationists. But the truthers are ever the odd men out, whether they're talking about assassinations or false flags or stolen elections. The truth is too hot to handle. I'd like like to see the progressive and peace coalition stretch to encompass the various truth movements--9/11, false flag terrorism, assassinations, electronic vote theft, and Gary Webb's story linking our CIA to the drug trade.

Radical inclusiveness has become a trademark of the progressive moevement in the 21st Century. Truthers are the only pariahs left out of the big tent. It's getting kinda lonely out here. 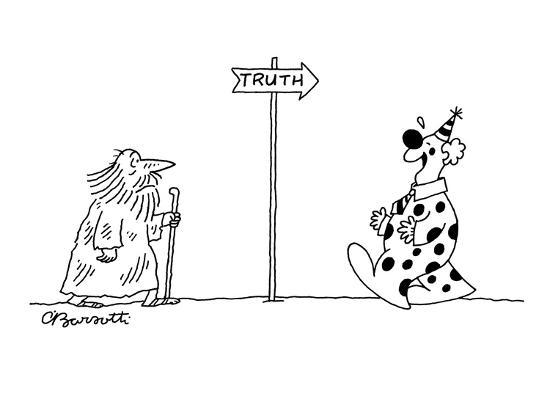 Related Topic(s): Truth, Add Tags
Add to My Group(s)
Go To Commenting
The views expressed herein are the sole responsibility of the author and do not necessarily reflect those of this website or its editors.