Trump and Netanyahu are trying to take credit, but this movement is all about the people. 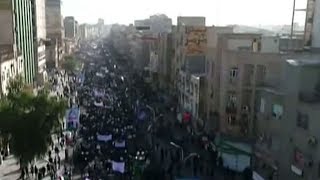 All eyes are on Iran. On December 28, as if from nowhere, protests broke out in Iran's second most populous city, Mashhad -- out in the far east, near the Turkmenistan and Afghanistan border. The protests moved with deliberate speed across the country, to Kermanshah in the west and Bandar Abbas in the south. Tehran was not spared, although it is not the epicenter of the protests. This is unlike the Green Movement of 2009, when Tehran's reform-minded citizens came onto the streets angry with what they saw as a stolen election. It is unlike the student uprisings of 1999, again centered in Tehran, when students protested over the closure of the reform newspaper Salam.

Those were protests of a rising middle-class, throttled by social sanctions and by political limitations. Their protests culminated in the election of President Hassan Rouhani, who is the current standard bearer of their hopes. Social sanctions have been eased in Tehran -- women openly sit in public without the veil (the police in Tehran had said earlier last year that they would not arrest women who did not wear the hijab). Even political rights are now somewhat available to the reformers. Ali Shamkhani, secretary of the National Security Council, said that restrictions on imprisoned reformist leaders would be lifted.

The current wave of protests is characterized not so much by a desire for an expanded political system, the terms of previous "reform" protests. This is an upsurge against the privations in Iran -- unemployment, deprivation and hopelessness. The sharpness of the slogans -- even against the Supreme Leader of the country -- indicates the level of anger at the failure of the Islamic Republic to deliver the basic needs of a growing and youthful population.

The protests were no surprise to those who had watched almost weekly working-class actions in factories and oil facilities as well as protests by retirees and those who had lost money in the banking crisis. These actions raised the confidence of the working-class and the lower middle class, both of whom had seen their standard of living plummet.

What is taking place in Iran is not unlike what is taking place across the oil-producing states from Venezuela to Saudi Arabia. Oil prices began to drop sharply in the second half of 2014 as a result of high output from Saudi Arabia and their Gulf allies. Iraqi and Libyan oil production had fallen, so it appeared on the surface that the Saudis and their Gulf allies were merely covering that shortfall. But as supply far outpaced demand the volume of oil that the Gulf countries produced seemed to have a political motive. It hurt Iran, already wracked by the UN, European Union and US sanctions, but it also hit Russia and Venezuela. The West and the Saudis saw these three countries -- Iran, Russia and Venezuela -- as adversaries. It was quite clear that this was a political move.

Unrest in Venezuela mirrors that in Iran. Both countries -- since the 1940s -- have been reliant upon oil exports for their own development agenda, both countries failed to diversify their economies beyond oil and both countries relied upon depleted national budgets to provide social welfare to their populations. It was this narrowed economic and political landscape that produced the Iranian Revolution of 1978-79 and the Venezuelan Revolution of 1989-1999. The political outcomes in both were different, with the former dynamic being led and seized by the Islamic clerics and the latter dynamic being led and seized by the Bolivarian socialists.

Both Iran and Venezuela -- from different sides of the political spectrum -- found themselves in the gun-sights of the United States and its Western allies. It was this that led to the sanctions regimes against both -- pushed by the United States government. The sanctions against Iran and Venezuela have been at different intensities, with Iran being hit harder over the past decade. Neither Iran nor Venezuela was able to effectively find an exit from the sanctions regimes or to create regional or alternative trade networks that would earn them foreign exchange and investment as well as enhance their ability to be less dependent on Western networks of finance and investment.

Iran's government -- led by Hassan Rouhani -- had raised the expectations of the population when it negotiated the nuclear deal with the West and the United Nations in 2015. The sanctions cost Iran more than $160 billion in oil revenues since 2012. This penalty was borne by ordinary Iranians, who saw their standard of living fall and their aspirations for the future narrow. Rouhani had said that the nuclear deal would attract investment into the country and free up Iran from the murderous sanctions regime.

But, since the nuclear deal, the handcuffs on Iran remain. The US -- under Trump -- tightened non-nuclear sanctions. Trump's belligerence towards Iran has stayed the hand of many transnational firms that had earlier expressed interest in making investments inside Iran. Rouhani's bet has not really paid off. The 2015 nuclear deal, an achievement in its own right, did not fully provide the kind of relief needed for the Iranian population. Expectations were raised, but little has been delivered.

As part of his pledge to openness, Rouhani's government released details of its budget to the public in early December 2017. Rouhani pledged to spend about $100 billion -- less than a third of his draft budget -- on public service programs for job creation and for a new social security program. Inflation remains a problem, as do the 840,000 young Iranians who will enter the workforce next year.

Confidence in Rouhani's budget was dampened when the public got to see how much money goes towards the clergy-dominated institutions. For example, in the city of Mashhad, where the protests began, the Astan-e Quds Razavi, Iran's largest endowment, a foundation that controls a shrine in the city, owns 43% of the land in the city and has an income near $150 million per year. In the 2017 presidential election, Ibrahim Raisi, the candidate of the Supreme Leader Khamenei and head of Astan-e Quds Razavi, openly said that Khamenei had allowed the endowment not to pay taxes. This rattled a population that saw these institutions as sponges on a state that had turned its back on ordinary Iranians. All of this produced a deep sense of disquiet amongst those who don't see themselves being the beneficiaries of the nuclear deal.

Related Topic(s): Iran; Iran Versus Israel; Oil; Poverty; Protest; Revolution; Sanctions; Subsidies; Unemployment, Add Tags
Add to My Group(s)
Go To Commenting
The views expressed herein are the sole responsibility of the author and do not necessarily reflect those of this website or its editors.