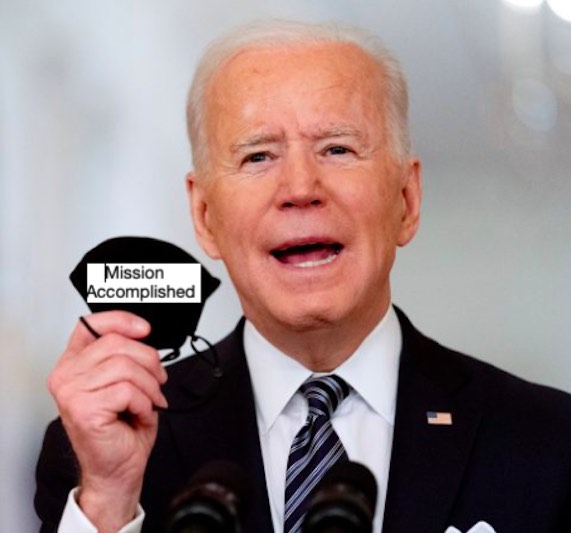 In the clash between sound science and political pressure from anti-science crackpots in the United States, the Biden administration and the Center for Disease Control have blinked, announcing prematurely that people who are vaccinated can basically give up masking except when traveling on public transit or visiting health facilities.

The idiocy and mendacity of this announcement, at a time when only 36% of Americans have been fully vaccinated (about half the rate required to stop the disease's spread) is stunning.

Wearing a mask is not a burden, it doesn't prevent someone from speaking, from going about routine business, even, as I have discovered over this past year, from running. What it does do is prevent the spread of disease. Why the unseemly rush to do away with mask requirements?

Several doctors and a dentist I have had occasion to visit over the past few months have all remarked that the reason we did not have a flu epidemic too this year is because there was so much mask wearing going on that it the flu virus never got a chance to spread. That's a pretty good good "control" demonstrating to even the most pig-headed anti-masker that masks do work.

Maybe we don't know how well they work at preventing Covid spread, because we haven't had a Covid epidemic like this before, but we have had a long history of raging flu epidemics, so we know what they typically look like, and there was really nothing this year resembling a flu epidemic.

According to the CDC, through this past February its labs only received 1585 samples that tested positive for flu. That compares to 183,000 positive samples last year, which was not a particularly flu season. In a WebMD article, Dr. William Schaffner, an infectious disease expert at Vanderbilt University, part of a network of hospitals monitoring for flu cases, said that as of the end of February they had received none. By that same date, only one child in the US had died of flu, compared to 195 by that time last year.

While there are several reasons being given for this anomaly, including the fact that people are avoiding large densely packed groups, bars, dances and mass transit. But

the fact that for the first time in history, Americans are doing what Asians have routinely done for decades masking themselves in public settings and on transit during flu season is clearly also a big factor"...

Related Topic(s): Coronavirus Pandemic; Facemasks; Pandemic Fatigue; President Joe Biden, Add Tags
Add to My Group(s)
Go To Commenting
The views expressed herein are the sole responsibility of the author and do not necessarily reflect those of this website or its editors.