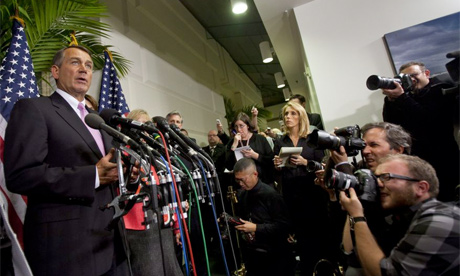 The conventional wisdom among the current generation of school reformers is that bad teachers are to blame for the failure of many of our children to learn. Applying this logic to the current debates over the budget and the economy, we should be pointing a big finger of blame at the media.

As survey after survey shows, the vast majority of the public are incredibly ignorant of the most basic facts about the budget and the economy. If we treated their teachers in the media the way the educational reformers treat public school teachers, few economics and budget reporters would have jobs.

One needs only to pick up a newspaper or turn on the television to get examples of thoroughly awful reporting. When we hear pledges to reduce the projected deficits over the next 12 years by $2tn or $4tn, how many people have any clue how large these reductions -- on which the current debt ceiling talks between President Obama and House speaker John Boehner turn -- are, relative to projected spending or projected GDP over this period? (The $4tn figure is 8.7% of projected spending and 3.7% of GDP.)

How about that $14.3tn figure for the debt ceiling? That's a really big number, really scary. So is just about every number connected with the United States budget. We are a huge country with a huge economy. Competent reporters would focus on this being about 90% of US GDP.

So, what's the problem? The politicians who want to cut social security and Medicare obviously want the public to believe that there is a huge problem and -- due to the incompetence of the media -- they have managed to instill fear throughout the nation about this massive non-problem.

If the media were doing their job, the public would be able to put these debt numbers in context. And the politicians who attempted to exploit fears based on ignorance would be subjected to ridicule. For example, when Senator John McCain was basing his 2008 president campaign on attacking the $1m spent on creating a Woodstock museum, competent reporters would have barraged him with questions as to whether McCain understood that this came to 0.00003% of federal spending.

They would ask him how much time he thinks that Congress should spend scrutinizing three hundred thousandths of 1% of the federal budget. If Congress spent one minute debating every McCain Woodstock museum-sized expenditure, it would take it 6.3 years to get through this year's budget, assuming that it was in session 24 hours a day, 365 days a year.

In the same vein, when a politician asserts that social security is going bankrupt and that there will not be anything left for her children or grandchildren, serious reporters would ridicule her for being ignorant of the social security trustees projections. These projections show that even if nothing is ever done to change the program, future beneficiaries will always be able to collect a higher benefit than current retirees. The "nothing there for our children" would be treated as a serious gaffe, sort of like then Senator Obama's comment before the Pennsylvania primary about working-class people being bitter and clinging to guns and religion. The difference is that the social security comment has direct relevance for policies that affect people's lives.

When a politician complains about President Obama's taxes strangling the economy, reporters should ask them whether they know that taxes are less of a burden on the economy now than at any point since the second world war. A politician who is concerned about tax burdens should be expected to know this.

If economic and political reporters applied the same sort of investigative zeal to economic and budget reporting as they did to Representative Anthony Weiner's twittered underwear picture, we would have a much better informed public. Not only would the news stories that we see and hear be much more informative, but politicians would be less likely to make things up to advance their political agenda.

Dr. Dean Baker is a macroeconomist and Co-Director of the Center for Economic and Policy Research in Washington, D.C. He previously worked as a senior economist at the Economic Policy Institute and an assistant professor at Bucknell University. (more...)
Related Topic(s): Fear As Policy; Reporters; Taxes, Add Tags
Add to My Group(s)
Go To Commenting
The views expressed herein are the sole responsibility of the author and do not necessarily reflect those of this website or its editors.