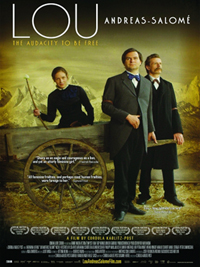 Copyrighted Image? DMCA
Women are once again striving to find their power, while pushing back against a renewed shift toward patriarchal values and legislated limits on reproductive rights. The new film, "Lou Andreas-Salome', The Audacity to be Free," could not be better timed.

History too often repeats itself. We are currently in a period when the rise of anti-democratic sentiment is sweeping the globe. Experts on authoritarian leaders and governments underscore that totalitarianism and misogyny go hand in hand. Even in 2018, women forging their own narratives get disparaged.

"Lou Andreas-Salome'," a German language film directed by Cordula Kablitz-Post, begins with a scene of a 1933 Nazi book burning. Freud's work is going up in flames. Psychoanalysis was designated as a "Jewish science," and Salome' was a friend and colleague of Freud.

Reminiscent of two big movies of the late 1960s, "Isadora" and "Women In Love" -- both made when the Women's Movement was gaining traction -- the film is a rich tapestry of history, emotion, and visual imagery. In the latter category, one creative motif employed by Kablitz-Post is the transition of her players, from one locale and time frame to another, via tinted postcards. First introduced as part of Salome''s memorabilia, static individual cards act as a backdrop for actors engaged in an activity.

Salome' is a larger-than-life figure. Top thinkers including Friedrich Nietzsche, Paul Re'e, and Rainer Maria Rilke are entwined in her life. Yet, despite her accomplishments in the fields of philosophy, psychology, and published writings as a poet, essayist, and novelist (Her first book was written under a male pseudonym.), Salome' has remained woefully under the radar.

Revealing Salome''s story in flashbacks, Kablitz-Post uses the talents of three actresses to capture the essence of her subject. Broken down into the ages of 16, 21 to 50, and 72, this approach allows the viewer to experience the evolution and journey of Salome''s life. The audience accompanies her while witnessing how her personal history evolved, and the events in which they were rooted.

The interlocutor for this process is Ernst Pfeiffer, a young man who reminds the older Salome' of Rilke. Their interaction is not without conflict. Yet, Pfeiffer develops into a close friend, and ultimately serves as the literary executor of Salome''s estate.

Salome' is introduced as a little girl, emphatically insisting, "No!" It sets the stage for her saying, "Nein!" to the strictures of the church, a mother who wants her to marry and become a financially comfortable hausfrau, and the men who want to possess and control her.

The character of Salome' delivers remarks throughout the movie which embody her thinking from each respective period. As a young woman, we see her lecturing on the importance of women having "freedom of movement" to develop a "true path in life."

When Salome' meets the leading male minds of her time, most who will fall in love with her, the excitement she feels when engaging in intellectual discourse is palpable.

Born in St. Petersburg, Russia in 1861, Salome' is the sixth child of her family. Her siblings are boys. She rebels against the clothes and shoes that prevent her from climbing trees as easily as her brothers. "Why should girls always play indoors?" she laments, after falling out of a tree she was exploring. The tree will become an anchoring point, as well as a symbol of Salome''s quest for self-determination.

The world Salome' has known is shattered when father, and ally, dies. She is 16-years-old. He leaves her a note which advises, "Become who you are."

She takes his words to heart.

In a dramatic scene, Salome' challenges the leader of her church during services, only to storm out when he is unwilling and unable to supply a satisfactory response.

To advance her knowledge, Salome' begins to read about philosophy. She studies with the Dutch-born minister Henrik Gillot, who expands her horizons in the areas of theology, German and French literature, and philosophy. While under his tutelage, her youthful crush is taken to heart by the 40-year old Gillot. When he proposes to Salome', offering to unencumber himself from his wife and children, she rejects him and his physical advances. Shaken, Salome' vows to close herself off from falling in love.

Related Topic(s): History; Identity; Love; Marriage; Nietzsche; Philosophy; Psychoanalysis; Psychology; Sexuality; Women, Add Tags
Add to My Group(s)
Go To Commenting
The views expressed herein are the sole responsibility of the author and do not necessarily reflect those of this website or its editors.