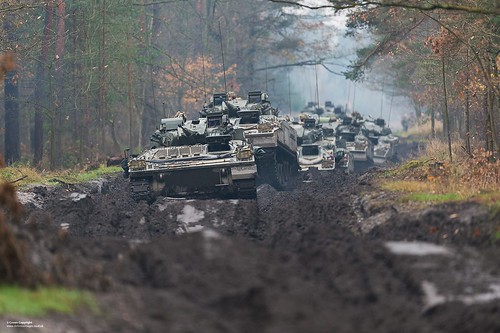 The Baltic states continue to be one of the most militarized region in Europe. The planned reduction of American troops in Germany to 25,000 could increase the likelihood of further strengthening of relations between the Baltic states and the United States.

Gradually, the Baltic states become Washington's most reliable partners in the process of escalating tensions in eastern Europe.

In particular, Lithuania keeps up politics of militarization of the country. According to the Lithuanian Defence Ministry plans, the Land Forces intend to build up the amount of ammunition depots with required infrastructure until 2026. Among them:

In general, it gives the possibility to store almost 1100 tons of ammunition. As a result, the current NATO and U.S. security policy in the Baltic region leads to increasing military capabilities in Lithuania.

A high concentration of weapons and ammunition can be a source of military threat in case of political tension or worsening of the international situation.

Lately there has been a lot of discussion about an increase in defense spending. In 2018 the political parties represented in the Seimas (except the Social Democrats) signed a controversial agreement on the guidelines of Lithuania's defense policy to achieve defense spending to 2.5 % of GDP.

Populist desire to demonstrate "who loves the Homeland more" and "we are the most reliable partners of the USA" tends to take over wisdom.

Related Topic(s): Militarization; Military; Military Deployment; Military Equipment Weapsons Supplies, Add Tags
Add to My Group(s)
Go To Commenting
The views expressed herein are the sole responsibility of the author and do not necessarily reflect those of this website or its editors.

Big military budget is a pain in the neck for Lithuanians

China and India are on the verge of war

NATO military spending: Baltic States are at the top