Donald Trump, the man who bragged about sexually harassing women, who advocated carrying out a loud protester on a stretcher, is the same person who praised armed Neo-Nazis, who called nations "sh*t hole countries" simply because they were mostly Black and Brown. He is the same Donald Trump who purposely revealed classified information to the Russian government, denied their blatant attempts to fix our elections, strong armed Ukranians for information on Hunter Biden, tried to manufacture votes in Georgia and who now has incited riots in the Capitol in order to purposely foment insurrection against our government.

Today, on Meet The Press, Trump's recently resigned Chief of Staff, Mulvaney, originally a "Tea Party," that is, "fair weather" patriot, who is only an American when it suits him, claimed that the Donald Trump of old had somehow evolved, temporarily, into some sort of rational and objective chief executive! Unfortunately, the rest of Trump's chiefs of staff had long ago explained that they had all stayed on as long as they had in an impossible attempt to save the country from the "clear and present danger" threatened by an incurable narcissistic sociopath occupying the White House. All of his supporters not only ignored, but encouraged his reckless handling of the COVID-19 pandemic- aiding and abetting him in the murder of hundreds of thousands of victims by "depraved indiffeernce," a crime with which they will have to live for the rest of their lives. 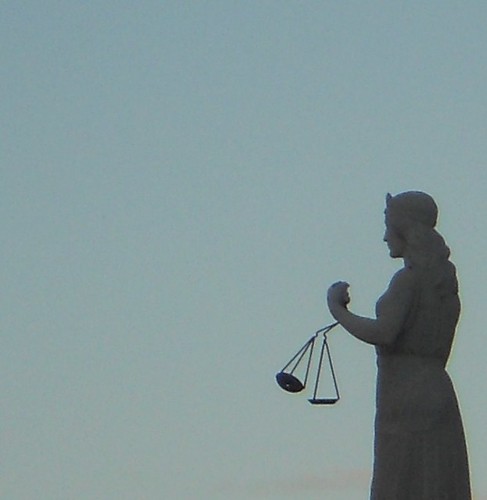 Scales of Justice
(Image by mikecogh from flickr)   Details   DMCA
At the same time that a number of Republicans admitted the obvious truth, other vocal critics, apparent snivelling cowards such as Mick Mulvaney, Lindsey Graham, Ted Cruz, Mike Pence, and many others, bent to immense political pressure and actually came to praise their autocratic leader. Their excuse: abortion and gay marriage, two issues on which Trump did an about face when he changed party allegiance just to get elected. When looking for excuses, these types of hypocrites prey on the poor ignorant bastards who take those issues so seriously to the exclusion of so many equally important issues.

They help kill hundreds of thousands and help infect millions of people because an arrogant, pompous ass in the White House disses masks and social distancing. They violate 70 years of bipartisan U.S. peacekeeping and international trade policies that, with all their faults, are what actually "made America great." Though they are policies in which, for the most part, these people still believe, they just kiss the feet of some ignoramus under the control of his Russian benefactor! They profess to believe in Jesus, who is somewhere, undoubtedly retching violently at the very sight of these inveterate liars!!

These people and others like them cannot escape some amount of culpability for the recent attack on the White House, nor can they deny their contribution to the deaths of the 5 people who lost their lives during the insurrection. The deaths occurring during the commission of an armed felony are technically "murder," possibly even the deaths of those who suffered heart attacks. While I do not propose to arrest and try hundreds or thousands of "insurrectionists" for murder, a number of perpetrators need to be prosecuted to the full extent of the law if possible. Whether the president decides to pardon himself or if he convinces an ambitious and clearly morally compromised Vice President Pence to pardon him, in this case, unlike others, Trump needs to be arrested. This needs to be done despite the patently absurd custom of the effete organization not only refusing to arrest a sitting president, but even to admit that he has committed a crime when he has clearly done so! Let the Supreme Court, with Clarence Thomas being forced to recuse himself or be impeached and still biased as it may be, decide, once and for all, if it is legal. Beyond this,

I firmly believe that, given the apparent intransigence of the high courts and their political bias, the best place to settle most of these issues ought to be in civil court. I believe that Trump, as well as his most notable accomplices need to be sued through civil cases. This includes Ginni Thomas, lobbyist wife of Clarence Thomas who publicly supported and encouraged the Capitol insurrection. This however inadequate remedy may be all there is for victims and families of the people killed or injured in the Trump incited insurrection. This could also apply to a massive class action suit for the president and his various henchmen's purposeful mishandling of the COVID response as well as for any illicit profits he or his political donors may have made from the mishandling of the pandemic. I believe others of his thralls also need to be exposed to civil liability even if lawmakers on both sides of the aisle try their best to protect themselves and their ilk from such responsibility.

It is time to stop complaining about the violation of well established civilized norms and to begin discussions about whether to overturn some of the not quite so civilized norms that may actually need to be overturned, ironically, to save our democratic republic.

Related Topic(s): Capitol; Government; Liar In Chief; Trump, Add Tags
Add to My Group(s)
Go To Commenting
The views expressed herein are the sole responsibility of the author and do not necessarily reflect those of this website or its editors.