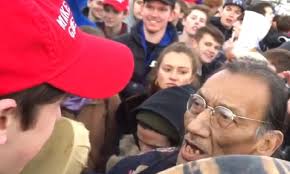 Writing an op-ed in the

Bishop Stowe said "no." It's a matter of faith, he said.

By taking that position, the Lexington bishop created what I would call a much-needed Dietrich Bonhoeffer moment for the church at a time when Mr. Trump exhibits traits and policies reminiscent of Adolf Hitler during his rise to power in the 1930s. (In the name of their faith, Bonhoeffer and members of his Confessing Church separated themselves from German Christians who supported

The bishop's words also incurred the wrath of Catholic Trump supporters much as Jesus in today's Gospel selection sparked anger in his own hometown when he called his neighbors' faith into question.

First, recall the context of the bishop's words. Then connect them to our reading and finally to Bonhoeffer and his church of resistance.

As for context, a video of the stand-off between the high school student, Nick Sandman and the Native American, Nathan Phillips, had just gone viral. Initial viewings led many to condemn the student's apparent disrespect.

Then, Sandman's parents hired a P.R. firm to spin his side of the story. As a result, public commentary quickly changed from blaming the adolescent for his apparently offensive smirk. It centered instead on whose version of the story was correct. Was the student (as the PR firm put it) merely smiling in an attempt to deescalate a threatening situation? Or was he making fun of the Native elder by placing his grin inches from the old man's face?

In an op-ed published in the

"Without engaging the discussion about the context of the viral video or placing the blame entirely on these adolescents, it astonishes me that any students participating in a pro-life activity on behalf of their school and their Catholic faith could be wearing apparel sporting the slogans of a president who denigrates the lives of immigrants, refugees and people from countries that he describes with indecent words and haphazardly endangers with life-threatening policies."

In other words, Bishop Stowe was broadening the concept of being "pro-life" -- the reason many Catholics back President Trump -- to question that support itself. Catholic faith, the bishop implied, cannot tolerate Trump's policies on immigration, refugees or other words or actions that disrespect Global South countries and endanger life (think climate change, capital punishment, drone assassinations, bombings, and illegal wars). Such behavior offends core Catholic beliefs about the inviolable sanctity of human life.

Specifically in reference to abortion, the Lexington bishop added:

"As the leader of the Catholic Church in the 50 counties of Central and Eastern Kentucky . . . I believe that U.S. Catholics must take a look at how our support of the fundamental right to life has become separated from the even more basic truth of the dignity of each human person. . . While the church's opposition to abortion has been steadfast, it has become a stand-alone issue for many and has become disconnected to other issues of human dignity."

Related Topic(s): Abortion; Catholic; Donald Trump; Donald Trump Supporters; Faith; God; Hitler; Jesus; Prophet; Sunday, Add Tags
Add to My Group(s)
Go To Commenting
The views expressed herein are the sole responsibility of the author and do not necessarily reflect those of this website or its editors.