Moving more out of step with progressive Vermonters all the time, Senator Pat Leahy announced at a meeting with constituents that his Truth Commission is off.

[The] senator is a hypocrite and a back peddling coward and opportunistic sell out. He could have been a servant of this nation and its Constitution; instead he chose to enjoy a measure of good press, progressive and liberal support, turned around and asked for campaign contributions for his “Good Acts” and then dumped us in the sewer of DC politics, bleeding, with a knife in our backs.

The Green Mountain State has been at the forefront of movements to hold Bush administration officials accountable for torture, lying us into the Iraq War, subverting the Constitution, and other crimes. A 2007 CBS poll showed two-thirds of Vermonters for impeaching Bush. At Matt Stoller's Opens Left 2010 Senate Primary Watch a commenter affirms the grumblings about Leahy:

let's please primary Leahy no matter what happens. His performance as ranking Dem on the judiciary committee during the Roberts and esp. the Alito hearings was dismal. Utterly Dismal. As ranking member, he should have had a game plan for Alito, esp after seeing the stealth type campaign that swept Roberts in. Now we have two more Scalias. Sure, it would have been a tough, uphill battle, but it would have been worth it and the buck stops at Leahy. Lousy strategy (i.e. none) lousy examination during hearings (I listened) and just downright lousy performance.

The news is not all bad however. Law School Dean Lawrence Velvel of the Justice Jackson prosecution project, which seeks to file a complaint against Bush administration officials for torture this spring, has taken to the airwaves and is tearing them up. This interview with WMPG FM's Michael Cutting in Portland, Maine is a strong indication that this is not going away, as politicians from Obama on right and on down would like it to. You can't hang men who are innocent, who you know are innocent, by the arms from the ceiling and torture them in the name of the American people. This interview is a MUST LISTEN.  (To get Velvel on the radio/TV in your town contact neimpeach-AT-gmail-DOT-com)

I'm going to assume that the Senate, as the most conservative institution on our Federal level, will be a major breeze to the right in terms of health care, trade agreements, civil liberties, economic justice, etc. Let's then examine the playing field for 2010; the environment for 2010 is unpredictable and probably chaotic, with a sharp recession on its way and a credit crisis here now.

I'm particularly interested in possible primaries to the Democrats, the party that the lobbyists are going to fete repeatedly and intensely in 2009 and 2010, much to our chagrin. I'm sure there will be retirements, but here's the list of Democrats up for reelection:

The economic crisis is likely to soften up incumbents as only an economic crisis can, as Americans previously fat and happy keep raiding food pantries and losing homes. Anger and political involvement always increase when a threshold of greed, beyond what is normal and expected of our ruling classes, is crossed, and Americans wake up from the disbelief of staring at nest eggs which are now empty. Yep, that's good and empty alright. A lifetime of work. And those guys who are getting bailed out, their idea of pain is having to buy a smaller offshore villa.

When it sinks in that a mere $114 million to senators and lobbyists bought $300 billion in TARP funds for banks and financial institutions who made bad bets, a 260,000 PERCENT return on investment, American Idol will no longer keep the rabble diverted and entertained, especially if they have to shut off the cable to buy food. Meanwhile, the top one-percenters in income who by themselves get 1/3 of the pie, go bargain hunting in the stock market, with the bailouts you are paying for. Sucks, doesn't it?

Even Donald Trump admits he has lost plenty of net worth, but sunnily gloats:

"We're going up. We're buying things we couldn't have dreamed of buying two years ago. And we have a lot of cash."

The way the pie is now divided and how it got there is neatly summarized in these two charts, from the Too Much Newsletter on Excess and Inequality: 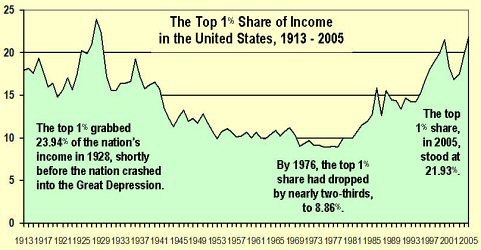