As of this writing, riots continue throughout Afghanistan. Anti-American and anti-Christian furors have sprung up, injuring more people. The death toll is now at 10, with 83 wounded.

The riots have reached Kandahar. A schoolbus full of young girls was attacked by the Taliban. Terry Jones plans more protests with total lack of concern. 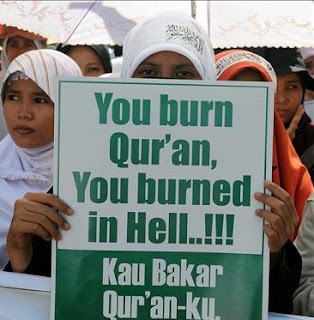 It is said that Pastor Terry Jones virtually studied his hatred at the feet of Fred Phelps. Phelps has not spoken to Jones after Jones' plans to burn the Quran last Sept. 11 became public, primarily because his efforts received more attention (the Phelps clann had actually burned the Holy Book before). I wonder how Phelps is reacting to his former student's fatal publicity grab.

To the nation and the world, Terry Jones looks like Fred Phelps on steroids: with his deliberate act to cause mischief and strife, Jones has now run past Phelps in the race to be the Most Hated Man In America. Let us not miss the irony that both hold the title of "Reverend." That title alone would have forced Jones to feign shock and dismay at the results in Afghanistan. However, he showed neither, thus relegating him to the status of  self-righteous, cold-blooded killer. His ubiquitous statement to ABC News ...

"Of course we were very saddened and devastated by that," he told ABC News. "It is of course a terrible thing anytime anyone is killed." relayed not even the least amount of sympathy or regret.

Afghanistan's indignation has sparked terror and criticism around the world:

Last week, St Thomas church in Wah Cantt (Afghanistan) was attacked by a group of Muslims who tried to break through the front door and set fire to the building.
The church's pastor, Father Yousaf, said: "This is a reaction of the desecration of the Koran in Florida. Although the Catholic Church has officially condemned the incident and we have also displayed a banner outside the church condemning the incident, still the innocent people are facing the consequences."

Pakistan has released official letters to the Vatican and to Interpol, beseeching both to take appropriate action and calling Jones a blot on the name of humanity.

The city of Dearborn, MI is hoping to dissuade Jones from a scheduled protest. A northern Michigan Militia group invited Jones to help protest outside of Islamic Center of America, the largest mosque in North America.

... Muslim extremists burned dozens of churches near Jimma town in the western Oromia region over the past several days. Even though the census show that about 60 % of the Ethiopia is Christian, still the sever reaction of the Muslim extremist couldn't not be controlled or stopped.

More than 11 countries so far have condemned the Quran burning by Terry Jones: India, Bahrain, Indonesia, Pakistan, Britain, Canada, Malaysia, Lebanon, Germany, Vatican City, Kuwait. Note that they have condemned JONES and not the afghans who rioted.

Rev. Dan Vojir is has been writing/blogging on religion and politics for the better part of ten years. A former radio talk show host (Strictly Books " Talk America Radio Network) and book publisher, Dan has connected with some of the most (more...)
Related Topic(s): Afghanistan; Anti-christian; Fred Phelps; Hatred; Islam Muslim; Islamaphobia; Koran; Religious Hypocrisy; School Children; Taliban; (more...) Terry Jones, Add Tags  (less...)
Add to My Group(s)
Go To Commenting
The views expressed herein are the sole responsibility of the author and do not necessarily reflect those of this website or its editors.