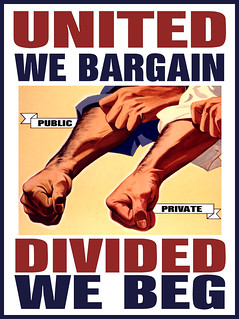 The celebration of Labor Day is a good time to remember the role that labor unions have played in raising living standards and improving the quality of life for working people in the United States. While most people recognize that unions have been beneficial for their members -- raising pay, improving work conditions and increasing job security -- there is little appreciation of role of labor unions in promoting benefits and work rules that protect all workers.

Unions were crucial in the passage of just about all the benefits and rules that we take for granted today, starting with the weekend. The 40-hour workweek became the standard in the 1937 with the passage of the Fair Labor Standards Act. This bill, which also put in place a federal minimum wage, required a premium of 50 percent of pay for any hours that an employer required in excess of 40 hours a week. Unions had pressed for similar rules for decades, but it took the power of a militant labor movement, coupled with a sympathetic president and Congress to finally make the 40-hour workweek a standard across the country.

This was also the year that the Social Security system was created. Again, the leadership of President Roosevelt was essential, but the Social Security would not have come into existence without the support of the labor movement. There was a similar story with the passage of the Medicare Act three decades later. The leadership of President Johnson was important, but there is no way the bill would have passed Congress without the pressure coming from organized labor.

These two programs provide a layer of security that is absolutely essential to anyone who is not rich. More than 70 percent of retirees rely on Social Security for more than half of their income. Very few seniors would be able to afford health care in their last years if it were not for Medicare and its sister program Medicaid.

But the impact of the labor movement is not just a historical legacy. In the last several years many state and local governments have raised their minimum wage, even as the Republican Congress has stymied any efforts at the national level. In every case where a higher minimum wage has approved, either by a legislature or through a referendum, the support of the labor movement has been essential.

The same applies to efforts to require paid family leave and paid sick days. Such measures have now been approved in dozens of cities and states across the country. In every case, the labor movement has played a leading role. If Congress does eventually require paid family leave and paid sick days, bringing the United States in line with the rest of the world, it will be in large part due to pressure from the labor movement. A majority of Congress will not pass such legislation just because they think it is a good idea.

The labor movement has also been active in other areas. For example, in many states, including California and New York, unions have been among those pushing for the adoption of a state-managed retirement system that would provide low-cost portable pensions to all workers in the state. Most union members already have pensions, but they recognize that the best way to protect these pensions in the long-run is to ensure that all workers can enjoy a decent retirement.

There are also indirect benefits from the role that unions have played in U.S. politics. While many unions have not made protecting the environment a top priority (some have) the representatives they have helped elect to the House and Senate are almost invariably far more supportive of environmental legislation than the members not supported by organized labor. The prospect for serious measures to curb global warming would go from bleak to zero in a Congress without the candidates who depend on the labor movement for support.

There are plenty of things wrong with the labor movement. It can be overly bureaucratic. There are corrupt officials in many unions. That happens with any large organization. But there should be no doubt that the country is much better off as a result of the labor movement and prospects for progressive change would be brighter if it were stronger. This is a simple point, but one worth thinking about for a few minutes on Labor Day weekend.

Dr. Dean Baker is a macroeconomist and Co-Director of the Center for Economic and Policy Research in Washington, D.C. He previously worked as a senior economist at the Economic Policy Institute and an assistant professor at Bucknell University. (more...)
Related Topic(s): Labor Rights; Labor-Unions; Politics, Add Tags
Add to My Group(s)
Go To Commenting
The views expressed herein are the sole responsibility of the author and do not necessarily reflect those of this website or its editors.