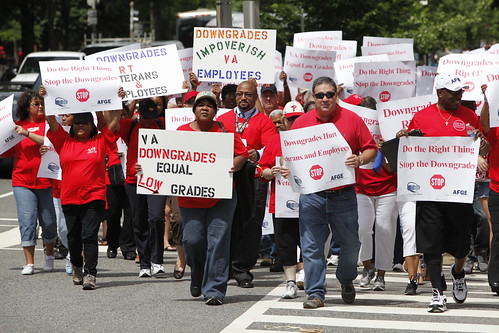 Nearly 250 years ago, our nation signed a promissory note, "We hold these truths to be self-evident, that all men are created equal, that they are endowed by their creator, with certain unalienable rights, that among these are life, liberty and the pursuit of happiness."

Today, some 13 million Americans are members of labor unions. Another 70 million say they would join a labor union if they could. It's easy to figure out why. Unionized employees earn 26 percent more than nonunionized employees and enjoy better benefits and more job security.

Conservatives claim that the higher labor costs increase the cost of goods and services. To some extent that is true, but at the same time union membership increases the disposable income of the middle class, making those fractionally more expensive goods and services easier to purchase.

The result of an abundance of well paid workers and slightly more expensive goods is a strong middle class and a healthy local and national economy, as America had during the 40 years before radical conservatives took over the White House and Congress in the 1980s. The result of the loss of good paying, living wage jobs may have brought cheaper goods at Walmart, but it has eviscerated the economies of our local communities and strangled the expansion of the middle class. The tax policies of conservative neo-liberal economics has greatly increased the number of people dropping out of the middle class, and into the category of the working poor, the largest percent of adults in poverty today.

When organized capital and organized labor have relatively equal levels of power, society becomes stable, as we witnessed throughout the period from the 1940s to the 1970s, the golden age of the American middle class. When government defines the rules by which the game of business is played, and supports policies in favor of corporations and against labor, as has been happening for nearly 40 years, then job security vanishes, wages drop, and corporate profits soar. CEOs award themselves multi-million dollar paychecks, and corporate corruption runs rampant.

Democracy in the workplace is known as union labor. The most democratic, unionized workplaces are the least exploitative because labor has the power to balance capital and management. Those cultures that embrace the largest number of their citizens in an egalitarian and democratic manner, in and out of the workplace, are the ones that have the highest quality of life. Those cultures that are most despotic, from the workplace to the government, are those with the poorest quality of life.

Empowering labor and the middle class and repudiating the sociopathic corporate activities that have led to a business culture that is a poison to our planet, is a vital first action toward remaking our culture in a way that is healthy and sustainable.

Related Topic(s): Class; Labor Child; Labor Day; Labor Issues Intl; Labor Laws Intl; Labor Laws US; Labor Party; Labor Rights; Labor Shortages; Middle Ground, Add Tags
Add to My Group(s)
Go To Commenting
The views expressed herein are the sole responsibility of the author and do not necessarily reflect those of this website or its editors.