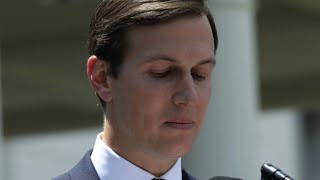 Before I turn to Jared Kushner, let me ask: Do you believe the U.S. government does the right thing all or most of the time?

But the largest factor by far has been the rise of big money in politics. Most people no longer believe their voices count.

That view is backed by solid research. Princeton professor Martin Gilens and Professor Benjamin Page of Northwestern University analyzed 1,799 policy issues that came before Congress, and found "the preferences of the average American appear to have only a miniscule, near-zero, statistically non-significant impact upon public policy."

Instead, Gilens and Page concluded, lawmakers respond to the policy demands of wealthy individuals and moneyed business interests -- those with the most lobbying prowess and deepest pockets to bankroll campaigns.

It's likely far worse now. Gilens and Page's data came from 1981 to 2002, before the Supreme Court opened the floodgates to big money in its Citizens United and McCutcheon decisions.

Trump and Bernie Sanders -- authoritarian populist and progressive populist, respectively -- based their shockingly successful campaigns on the public's outrage at the corruption of our democracy by big money. Sanders called for a "political revolution." Trump promised to "drain the swamp."

Which brings us to Jared Kushner, the putative swamp-drainer's son-in-law, and major adviser.

Kushner may yet be indicted in Robert Mueller's investigation. But it could turn out that Kushner's most significant contribution to the stench of this administration will come from his financial conflicts of interest.

When he took the White House job, Kushner chose not to follow the usual practice of wealthy people when they join administrations -- putting their assets into blind trusts managed by outside experts.

Instead, Kushner retained control over the vast majority of his interest in Kushner Companies, worth as much as $761 million, according to government ethics filings.

So how has Kushner separated his business dealings from his dealings on behalf of the United States? He hasn't.

Related Topic(s): Conflict Of Interest; Financial; Jared Kushner, Add Tags
Add to My Group(s)
Go To Commenting
The views expressed herein are the sole responsibility of the author and do not necessarily reflect those of this website or its editors.