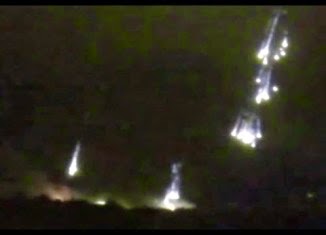 In recent days the US-NATO puppet project in Kiev has been using white phosphorus bombs against their own citizens in the east of Ukraine. The reason? They will not submit to full corporate fascist authority. Simple as that.....and Russia is next on the list.

I'm reading a very good book called Gladio: NATO's Dagger at the Heart of Europe, The Pentagon-Nazi-Mafia Terror Axis by Richard Cottrell. I highly recommend it.

In the book Cottrell shares this important insight while discussing the dangerously expanding role of NATO:

A military pact ostensibly grounded on the principle of common deterrence, but turning instead to aggressive belligerence, was foreseen with astonishing clarity by the American political and social visionary James Burnham. His seminal work The Struggle for the World appeared in 1947. In this he glimpsed an American empire exercising 'decisive world control,' and a US-sponsored European Federation, with the Marshall Plan as the warm-up act. The English-speaking powers and the Euro federation would eventually fuse as a Universal State, with the US occupying the central role of 'semi-barbarian, unifying power.' For easy consumption the arrangement would be sugar-coated as 'the policy of democratic world order,' an early insight of the emerging mercantile-military globalism we recognise all around us today. Burnham viewed this splendid project favourably. His pulse quickened at the sound of war drums. He imagined a planetary NATO, the prospect of 'winged soldier, air cavalry, able to raid two thousand miles behind the lines tonight and be gone before the defence arrives tomorrow.' In short, the promised land of perpetual war.

As you would expect the Russians and the Chinese are hyper-vigilant as they see the NATO war machine grind its way onto their doorstep.

Russia submitted a draft resolution on Ukraine at the Security Council Thursday demanding that the United Nations play a greater role in resolving the crisis, and accused Kiev of using white phosphorus.

Much of the village of Semyonovka, located in the Slavyansk suburbs, was set ablaze. Local residents told RT that the ground didn't stop burning for some time.

"We all saw what happened here yesterday. They used rocket launchers as well as incendiary bombs against us. The ground was on fire. How can the ground burn by itself. It burned for about forty minutes," resident Roman Litvinov told RT over the phone.

"Starting from 2 a.m. everyone I've met has a sore throat and is coughing all the time. I think this is because of the burning. I think we'll feel the true consequences later. There are still a lot of people here, a lot of children we haven't managed to get out yet," resident Tatyana told RT.

Cottrell also writes in Gladio, "Such collective punishment of civilians is against all established laws of war, and expressly forbidden by the Geneva and Hague Conventions. "

Indeed Cottrell is right that US-NATO are now barbarically doing anything they can to provoke Russia to take a military step forward to defend Ukraine. Not only is there a serious muscle pumping game going on but a global war for propaganda control is also underway. The US-NATO are directing, and likely supplying, Kiev with this illegal and immoral toxic assault on the citizens of the east.

When the people in the east defend themselves against this military attack they are called terrorists. But the US-NATO are the terrorists. Anyone who doubts that idea ought to read Cottrell's book Gladio. It spells out the whole story - in great detail.

We are up against the wall and the gun is pointed at us. Hope Mr. Big has got your attention.

Related Topic(s): Bomber; Gladio; Globalism; Russia; US Foreign Oil Policy; US-Iran Talks; US_Missle_Plan_for_Europe; Ukraine; Us Congress Sells Out To Wall Street; Us Economic Decline; (more...) Us Foreign Policy; Us Troops; War; War; White House Protest, Add Tags  (less...)
Add to My Group(s)
Go To Commenting
The views expressed herein are the sole responsibility of the author and do not necessarily reflect those of this website or its editors.