We don't know who's carried out violence and vandalism or why. We do know police keep killing unarmed black Americans. 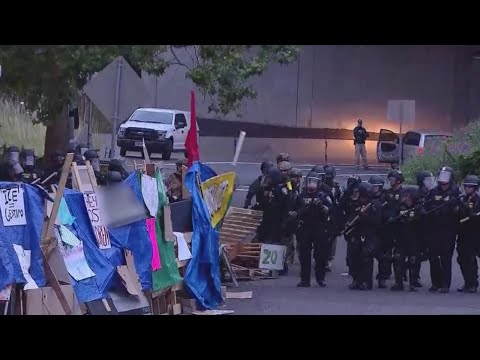 The grocery store across from my old house in La Mesa, California (just outside of San Diego) has been vandalized and looted. Two nearby banks were burned to the ground.

Who did it? In similar scenes across the country, it depends who you ask.

white supremacists, far-right extremists, anarchists and outside agitators, young people, white people, the police, and protesters whose peaceful protests against anti-black police violence went ignored until they could not take it anymore.

I've seen a video taken by a black woman of white people spray painting "Black Lives Matter" on a building. She asked them not to and pointed out that black people will be blamed for it.

I've seen that a photojournalist was shot by a cop in the eye with a pepper ball.

I've also seen countless Facebook posts in which friends assume they know who did the violence and either justify it or condemn it.

How much more can people take when they are being killed by police hired with their tax dollars to protect them?

Those are good points. But they only stand if the same people protesting anti-black racial oppression were the ones behind the rioting and looting. Were they?

On May 28, Black Lives Matter San Diego posted about a protest event planned for May 30. They wrote: "If you get an invite asking you to attend this event, DO NOT GO. It is hosted by suspected white nationalists who are using the name of #GeorgeFloyd to further build their anti-Black, white nationalist" agenda in San Diego."

Following the protests in La Mesa, they posted a statement condemning those "white folks" who are "using this moment of great pain for Black folks as your opportunity (i.e. looting, taking pics in front of cop cars, getting more likes and follows on your" social media).

These actions, they warn, especially "absent of Black leadership and self-determination," ultimately give the police "more covering when they lock us up and kill us."

It's possible that violence and vandalism in different places happened in different ways, for different reasons, by different groups of people. Anger and disruption from people whose lives are at risk can be easily understood, but we also need to be aware that others are causing violence for the express purpose of discrediting those protests.

Regardless of what happened or who did it or why, there are facts that still stand. George Floyd was murdered by a police officer. So were a long list of other innocent black people. One, Tony Robinson, was killed less than three miles from my house in Madison, Wisconsin.

Jill Richardson is pursuing a PhD in sociology at the University of Wisconsin-Madison.
Related Topic(s): Murder; Police; Police Brutality; Police Killing Blacks; Protest, Add Tags
Add to My Group(s)
Go To Commenting
The views expressed herein are the sole responsibility of the author and do not necessarily reflect those of this website or its editors.