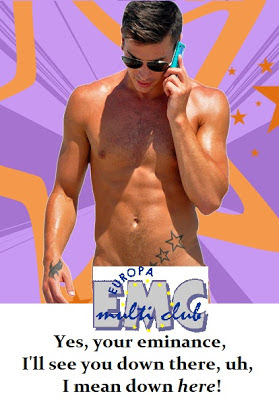 (Image by Unknown Owner)   Details   DMCA
A Call from above! by Google Images w/caption by Rev Dan

It's a situation worthy of  The Onion.

How convenient. Or inconvenient. The Vatican conclave of 117 cardinals woke up yesterday morning to see headlines like this:

One of Italy's largest daily newspapers, La Repubblica, announced the little-known fact that the Vatican has a majority ownership of a chic Rome apartment block that houses Italy's largest gay bathhouse.

It also houses one of the Catholic Church's chief homophobes, Ivan Cardinal Dias, India's chief prelate. As well as numerous other priests.

A day ahead of the papal conclave, faces at the scandal-struck Vatican were even redder than usual after it emerged that the Holy See had purchased a 23 million euro share of a Rome apartment block that houses Europe's biggest gay sauna.
The senior Vatican figure sweating the most due to the unlikely proximity of the gay Europa Multiclub is probably Cardinal Ivan Dias, the head of the Congregation for Evangelisation of Peoples, who is due to participate in tomorrow's election at the Sistine Chapel.
This 76-year-old "prince of the church" enjoys a 12-room apartment on the first-floor of the imposing palazzo, at 2 Via Carducci, just yards from the ground floor entrance to the steamy flesh pot. There are 18 other Vatican apartments in the block, many of which house priests.

In an era where scandals plague the Vatican like locust, the last-minute revelation of a major gay sex club under their very noses (as well as other things) may not seem too shocking. What is really shocking, perhaps, is that the Vatican did not think to cover up or dispose of the property prior to the conclave: the very grand apartments of the block - especially those of Cardinal Dias - made the property a prime target for the media, especially after the recent banking scandals and cries of unnecessary extravagance.

And of course, the fact that Cardinal Dias has been the most outspoken prelate against homosexuality and states that gays can be "cured" has the media in stitches:

Dias is known for reviling homosexuality, calling it "unnatural" and arguing that gays can be "cured."
That cure certainly does not require taking the waters at the Europa club, which boasts a Turkish bath, Finnish sauna, whirlpools, massages, "bear parties" and much more. 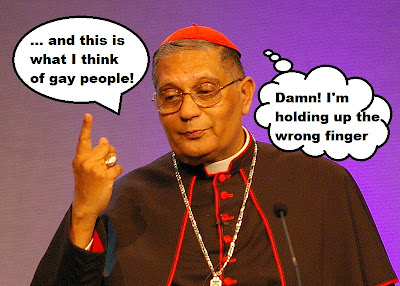 It is certain that there will be a I-didn't-know disclaimer put out by the cardinal's representative asap, but being silent at this time might be the most prudent approach to the affair: today's Catholic prelates cannot afford to look so clueless as to their own surroundings. They are, after all, men of the world and not cloistered monks. They are already so steeped in sexual scandal that any denial will be taken as completely disingenuous.

Back To The Future

The historical resignation of Benedict XVI set off alarms, the loudest of which was the now infamous 300-page dossier (part of the "Vatileaks" investigation, which, BTW, was also called "the 118th cardinal") which noted factions and infighting among prelates of the Vatican. Among the disclosures was the mention of a gay faction featuring meeting places. And while the Europa Multiclub was not mentioned by name, it certainly would fit the real estate investor's listing: "Large, well-appointed apartments situated in luxury complex that houses a gym, sauna and health spa."

This may be the last straw: the papacy will need to be transparent as hell or face suspicion and scorn for years to come. The conclave of 117 cardinals will need to decide if the man they are choosing should be a leader with honesty and integrity or, as was his predecessor, a cover-up king. After all, he will have a lot to cover up, bathhouses not included.

Rev. Dan Vojir is has been writing/blogging on religion and politics for the better part of ten years. A former radio talk show host (Strictly Books " Talk America Radio Network) and book publisher, Dan has connected with some of the most (more...)
Related Topic(s): Bathhouse; Cardinal Dias; Conclave; Homophobic; Pope Benedict XVI; Scandal; Vatican Bank, Add Tags
Add to My Group(s)
Go To Commenting
The views expressed herein are the sole responsibility of the author and do not necessarily reflect those of this website or its editors.