MARCH BE DAMNED! June is the month to lose your mind - and your soul - if you like fireworks! 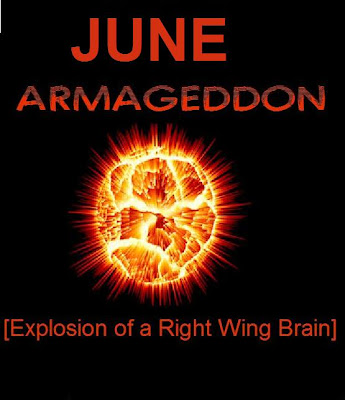 June: it used to be the month of grads, dads, brides, and the promises of summer vacations.  People could count on June because it was always the warm, dependable month, and although peppered with the unpredictable antics of Geminis, it gave us a feeling of lighthearted confidence.

Two thirds into 6/11, however,  the old concept of June has exploded and we may never see the likes of it again.

June was exposed to a Congressman's wiener  ... for weeks. It saw the Southern Baptist Convention's magnanimous outreach to the grandchildren of its slaves while still telling gays to go to hell.* In this month, the number of  GOP Presidential hopefuls grew exponentially (leading some to think they might form their own country). Newt Gingrich's staff, however, shrunk - to nothing. The elderly balked when told that they must starve for the sake of their grandchildren. The Family Research Council (almost) capitulated in the culture war after being blinded by rainbow flags for Gay Pride Month. Libya showed signs of morphing into Iraq. The UN resolution on gay rights made Africa vomit. And a celebrity politician toured a country she to knew very little about.

But what will be remembered as the most cataclysmic event of any June in history is that Right Wing brains exploded at a phenomenal rate. They exploded in righteousness and in frustration, in Tea Party angst and gay marriage capitulation. And they will pick up the pieces themselves, thank you very much. Or so they say.

BLAM! The first brain to explode was, of course, attached to Brian Fischer of the American Family Association: June 1st saw him apoplectic over gays as usual, telling everyone who would listen that they were the country's worst perpetrators of hate crimes and he seemed to mix up getting bashed in the head with a baseball bat to being criticized as a homophobe. The pieces of his brain are now trying to paint Southern Baptist as soft on immigration and gays. Unfortunately, Fischer's massive ego - quite separate from his brain - is intact, so he dismissed any cranial fallout and is now going after Mitt Romney as the true instigator of gay marriage.

BLAM! When Peter Sprigg of Family Research Council announced that the fight for traditional marriage may have been lost, Tony Perkins' brain exploded and immediately called for the nation to fall on its knees in repentence: his "Call2Fall" is scheduled for Sunday, July 3rd.

Nigeria claimed the proposal went against the wishes of most Africans. A diplomat from the northwest African state of Mauritania called the resolution "an attempt to replace the natural rights of a human being with an unnatural right."

Ironically, these are all countries "prophet" Lou Engle has had in his sites.

Of course, June has been slated as Gay Pride Month and even presented as such by President Obama, so we should have expected some explosions.

BLAM! But lest the reader think that Right Wing brain explosions have been about gays alone, read Chuck Norris' explosion about the horrible morality of today's left-wing media:

And if you think children are safe watching one of the more benign nature or history channels, consider that he or she might run into the History Channel's multiple-episode series, "The History of Sex" or even National Geographic's TV's adult-themed documentary series, "Taboo," which will test your boundaries and push beyond your comfort zone about issues like fantasy lives, strange love, nudity and the third sex.

BLAM! Not to be left out of the festivities, Michele Bachmann topped the month (so far) with a mind-blowingly stupid conspiracy theory: