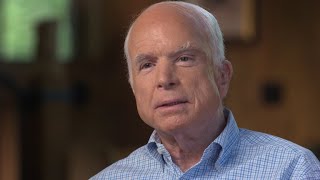 President Kennedy began his famous book "Profiles in Courage" by quoting Ernest Hemingway about that most admirable of human virtues, courage, which Hemingway defined as grace under pressure.

If JFK were with us today he would no doubt be visiting with Sen. John McCain (R-Ariz.), trading war stories and political stories, and cheering him on for a miracle recovery while they discussed the value of courage in America and the world today.

In the moving new HBO documentary "John McCain: For Whom the Bell Tolls," McCain speaks of his great admiration for Robert Jordan, the character Hemingway invented in his timeless novel, who went to Spain for the battle against fascism in the 1930s.

When considering the life and works of Kennedy, Hemingway and McCain, it is right and fitting to use the word "timeless." Some values and visions transcend time. In our times, John McCain embodies many of them including notions of duty, honor, country, courage and integrity in all endeavors of life.

It would be wonderful if President Trump, who embodies a darker set of values and visions that are sadly timeless for unfortunate reasons, would reach out to McCain with high praise to seek a reconciliation that soars above the low standards of our politics today.

It is the ultimate fusion of life and art when McCain says that while he was enduring the most barbarous torture as a prisoner of war in service to the country he loves so much, he was thinking about Hemingway's character Robert Jordan, who gave his life to save the woman he loved and to fight for the democracy he dreamed would someday light the entire world.

When McCain condemns torture with uncompromising patriotism and honor, he speaks a timeless truth that embodies the best of Americanism and civilized standards for the rules of war.

Like Kennedy and Hemingway and all of us, McCain was not always a perfect person, nor did he ever claim to be. When he made a mistake, as he did when he was embroiled in the Keating Five scandal, he took full responsibility, learned a noble and brilliant lesson, and forever thereafter championed the timeless truth that dirty money must never be allowed to corrupt and corrode our democracy.

When McCain joined in a bipartisan spirit with Wisconsin Democratic Sen. Russ Feingold to promote campaign finance reform, he acted in the noblest tradition of the Senate that Kennedy wrote about brilliantly in "Profiles in Courage."

When McCain speaks of returning Congress to the regular order, where legislation is thoughtfully considered by Democrats and Republicans in a spirit of public duty to get good deeds done for America, he tells a timeless truth about every legislature, parliament and congress in the history of democracy.

Like young John Kennedy who rose above the appeasement politics of his father and fully understood the danger to democracy in the 1930s, when McCain warns about the attack against democracy in America and Europe from a Russian dictator today he tells a timeless truth -- which every generation ignores at its peril.

When McCain fiercely defends the investigation by Robert Mueller, another hero in defense of democracy, of this Russian attack against America, McCain tells a timeless truth about putting devout patriotism ahead of partisan politics.

When McCain supports the battle to bring a humane immigration bill to the floor of Congress, he speaks a truth as timeless as Lady Liberty in New York harbor.

When McCain studied at the Naval Academy at Annapolis he fully absorbed the lessons of duty, honor, country and history that all midshipmen are taught. He first learned these lessons from his father and grandfather who were admirals in the Navy. They must be bursting with pride from heaven today.

If the Lord would grant me one wish it would be that McCain will be lifting the conscience of the Senate, the standards of our democracy, and the honor of our country by telling his timeless truths for many years to come.

Related Topic(s): Courage; Hemingway; Integrity; John McCain; McCain-Feingold Campaign Reform Act; Patriotism; Truth, Add Tags
Add to My Group(s)
Go To Commenting
The views expressed herein are the sole responsibility of the author and do not necessarily reflect those of this website or its editors.