It's irrational to invest someone like John Bolton with credibility, when Bolton lied and deceived us into war. 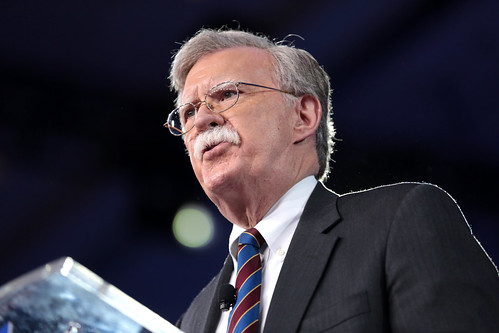 In June 2019, two men sat in the Oval Office and talked of war. One was the bloated embodiment of American evil, a smug and fatuous egomaniac whose power and arrogance posed an existential threat to millions of the planet's inhabitants.

The other was Donald Trump.

This conversation was reported by John Bolton, the extremist martinet who briefly served as Trump's National Security Advisor. Jennifer Szalai recounts the story as it occurs in Bolton's as yet unreleased book:

"You can sense Bolton's excitement when he describes going home 'at about 5:30' for a change of clothes because he expected to be at the White House 'all night.' It's therefore an awful shock when Trump decided to call off the strikes at the very last minute, after learning they would kill as many as 150 people. 'Too many body bags,' Trump told him. 'Not proportionate.'"

The most striking thing about this anecdote, if Bolton is to be believed, is that Trump is overriding his adviser for a more measured and humane approach. He may have done so for purely political reasons, but the contrast between the two is still striking. Equally striking is the fact that Bolton seems to think this anecdote reflects well on him and poorly on the president. The opposite is true. Anybody who lacks the requisite bloodthirstiness to meet with John Bolton's approval has something going for him, whatever other sins he may have committed.

Only an irrational hatred of Donald Trump could persuade anyone to turn to John Bolton.

The Hero That Wasn't

Democrats had hoped that Bolton's testimony on Trump and Ukraine would prove decisive in their impeachment inquiries. Early reports suggest that his book doesn't provide the ammunition they had hoped for. Bolton does, however, charge that Trump asked Chinese leader Xi Jinping to help him win re-election. There are only two ways to interpret that: One is that Bolton concealed an impeachable deed until it was too late to do anything about it. The other is that he's lying, as he's done so many times before.

Bolton's bombshells probably won't affect world history much. But failure should not be an unfamiliar experience to Bolton, a blundering war planner who is as incompetent as he is immoral. Bolton is Leslie Nielsen in Airplane! but with nuclear weapons. He's failed at every military objective he's ever pursued. But he's succeeded in one way: Together with fellow war criminal George W. Bush, Bolton's racked up a body count that exceeds one million lives. Trump can't come close to matching that.

And yet, in their eagerness to nail Trump for impeachable offenses -- and to do so exclusively on national security grounds -- Congressional Democrats were willing to turn the bloodthirsty Bolton into a star witness, a process that would have meant investing him with credibility.

Bolton's comments, as recounted by Hill, were already making him something of a liberal idol. A typical comment, from Rep. Stephen Lynch (D-Mass): "When he calls Giuliani a 'live hand grenade,' that says something. He speaks from experience. He's someone who should know."

Bolton's liberal apotheosis was at hand. Instead, he chose to decline the honor.

Related Topic(s): Impeachment; Irrational; John Bolton Warmonger; Liberals; Trump; Trump And Bolton, Add Tags
Add to My Group(s)
Go To Commenting
The views expressed herein are the sole responsibility of the author and do not necessarily reflect those of this website or its editors.