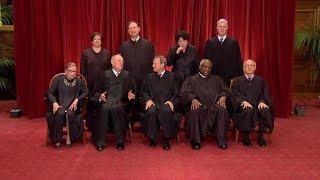 The US Supreme Court (by the usual 5-4) has certified Ohio's Jim Crow stripping of more than a million mostly black and Hispanic citizens from the 2018 voter registration rolls. Unless the Democrats effectively respond, a GOP victory in the 2018 midterm election may be a done deal.

The decision approves Ohio's race-based assault on the right to vote. Secretary of State Jon Husted has been stripping citizens who don't vote in consecutive federal elections. His office mailed some 1.5 million queries to registered voters. He got back fewer than 300,000 responses -- and then stripped some 1.2 million voters from the computer files.

Husted (now running for lieutenant governor) says he's sent voters a notice after they skip a single federal election. If they don't vote or respond in the next four years, they lose their ballot.

Court documents confirm that those eliminated are mostly urban blacks and Hispanics in mostly Democratic districts. Voters in rural Republican districts are often not queried, and their registration rolls are not stripped.

The usual five GOP Justices have ruled that this is fine with them. Secretaries of state throughout the US can now do the same thing.

GOP officials in Ohio, Alabama, and elsewhere have fought easily re-counted paper balloting by letting local election boards turn off the simple function on some machines that produce a ballot image that can be reliably verified.

The GOP is also defending gerrymandered districts that give them control of the US House and many state legislatures. With votes split evenly between the two major parties, Ohio has 12 GOP US representatives versus four Democrats. Both houses of the state legislature have overwhelming Republican majorities, as in North Carolina, Wisconsin, and elsewhere.

The Democratic response has been weak. Unless the party mounts a massive voter registration drive, checks the rolls before election day, shepherds people to the polls, fights off gerrymandering, watches the electronic voting machines and much more, it stands no chance to shift the balance of power away from the GOP this coming fall.

We've seen it all before.

In Florida 2000, Governor Jeb Bush used a ChoicePoint computer program to disenfranchise more than 90,000 alleged felons (virtually none actually were) in an election decided for his brother by 537 votes. Corporate Democrats still blame Ralph Nader for a rigged Al Gore loss on which he had no real impact.

In Ohio 2004, Secretary of State Kenneth Blackwell stripped more than 300,000 mostly urban Democrats from voter rolls in an election decided by 118,775. Blackwell chaired the Committee to Re-Elect Bush and Cheney while running the election. Kerry had been thoroughly briefed but never said a public word. Some 90,000 ballots remain uncounted from Ohio 2004. When a federal judge ordered a recount, 56 of Ohio's 88 election board claimed the ballots had been (illegally) destroyed.

From 2005 to 2008, some 1.25 million Ohio voters were stripped from the registration rolls, about a quarter of the state's voters. Some 1.1 million more were removed between 2009 and 2012. In 2016, another million-plus were removed, allowing Donald Trump to win the state.

Related Topic(s): 2018 Elections; Election Fraud; Election Law; Election Rigging; Election Theft; Supreme Court Justices; Voter Fraud, Add Tags
Add to My Group(s)
Go To Commenting
The views expressed herein are the sole responsibility of the author and do not necessarily reflect those of this website or its editors.