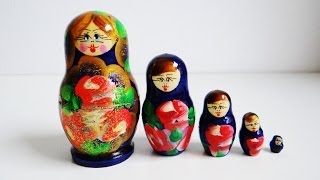 Matryoshka Doll Surprise Now for something different... This is a Matryoshka doll, which could be called the first ever surprise toy, invented 123 years ago in Russia. From Wikipedia: A ...
(Image by YouTube, Channel: pimimpa)   Details   DMCA

The impact of Jean Gebser's work is only now slowly coming to be recognized. He was a cultural philosopher, historian, linguist andbrilliantly intuitive intellectual. A mystic at heart, he was a student of literature, poetry, psychology and science, He was also an associate of Carl Gustav Jung, at whose institute he also taught for many years. Gebser was also a friend of Frederico Garcia Lorca and Pablo Picasso, and his understanding of culture is based upon a deep feeling for works of of poetry and art.

His fundamental theme arose from a vision of the evolution of consciousness during humanity's sojourn on Earth, which occurred in the middle of the rise of Fascism in the 1930s and the descent of Europe into the Second World War, (he narrowly escaped capture by Franco's Spanish regime and subsequently the Nazis and as a refugee, finally settled in Switzerland). During the remainder of his life, Gebser taught, traveled, wrote and lectured.

Gebser brought a unique combination of talents to bear upon the subject of his investigation: the unfoldment of consciousness. His work can help us understand our contemporary predicament as a choice between evolution and dissolution.

The fundamental premise of Gebser's work was that we are on the threshold of a new structure of consciousness. Overall, Gebser describes four mutations, or evolutional surges of consciousness that have occurred in the history of humanity. These mutations are not just changes of perspective, but massive transformations - "worldviews" which have been fundamentally different ways of experiencing reality.

These four mutations reflect five separate eras of development that are not distinct and isolated from one another but are, instead, interconnected such that all previous stages are found in subsequent ones. Each of these stages is associated with a dimensionality, beginning with the geometric origin of zero and progressing to the fourth, the transition which we have already begun experiencing. Gebser identifies these five phases as the Archaic, Magical, Mythical, Mental, and Integral stages respectively.

In his Magnum Opus Gebser, the Ever Present Origin, states that the human mind/consciousness has seen four evolutionary surges. We have already begun to embark on the fifth.

The Archaic Structure of Consciousness

The archaic structure is the first to emerge from "the Ever-Present Origin". Words necessarily fail us in describing this primary level of human development since nothing has been passed down to us in form of history, whether in form of words or images. It is difficult to imagine.

Here we are talking about the earliest emergence of human beings. For convenience this mode of awareness can be described as humans who are immersed (and "at one") with the world. In actuality there are no individuals, but rather a somewhat boundaryless identity with nature and tribe.

The Archaic structure of consciousness is perhaps the most difficult to understand, for it is the one most removed from our present-day way of thinking and apprehending the world. Stated succinctly, it can be likened to zero-dimensional mentation, a world devoid of any perspectivity at all. It is a state in which the holder of consciousness is perhaps only minimally aware of himself or his relationship to the world around him in human terms. For at least two million years our ancestors struggled in the twilight of self-recognition and self-discovery.

Gebser's conclusions are an intuitive apprehension of the borderline consciousness between animal and man; he describes this a "a dimly lit mist devoid of shadows."

The Magical Structure: The Magical Structure is one wherein man entered into the next phase of growth. It can be characterized by a sense of egolessness, spacelessness and timelessness, a pointlike-unitary world, its interweaving with nature, and its magical reaction to the world. In this stage humans started to develop a sense of rudimentary self-image. Though he was growing, the human was still intimately related to nature, and did not consider itself apart from it. Feuerstein suggested that this structure could easily have persisted till 40,000 B.C. and until the advent of the Cro-Magnons.

The "magic man" lives as if he is in a dream-like state. The notion of space, time etc. are illusive to the magic man as he does things in a state of unknowing, motivated only by the survival instinct.

In the magical structure, events, objects and persons are magically related. Symbols and statues do not just represent those events, objects and persons, but are those same objects and persons. Gebser symbolizes this "one-dimensional" consciousness structure by the space-less, time-less "point". Unlike the archaic structure in which there is a "perfect identity of man and universe", man is aware of nature as something within his community to which he or she must "listen" and act in order to survive. There is actually a slight emergence of a sense of separate self, though in embryonic form.

Related Topic(s): Awareness; Consciousness; Freedom; God; Illusion; Indivisible; Logic; Materialism; Philosophy; Quagmire; (more...) Recovery; Recovery; Thinking; Time; Transparency, Add Tags  (less...)
Add to My Group(s)
Go To Commenting
The views expressed herein are the sole responsibility of the author and do not necessarily reflect those of this website or its editors.