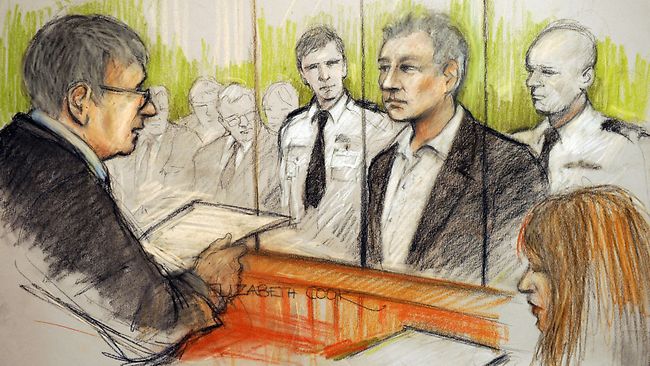 Elizabeth Cook's artist impression of WikiLeaks founder Julian Assange's appearance at Westminster Magistrates Court in London, where he was denied bail after appearing on an extradition warrant. Source: AP

IN 1958 a young Rupert Murdoch, then owner and editor of Adelaide's The News, wrote: "In the race between secrecy and truth, it seems inevitable that truth will always win."

His observation perhaps reflected his father Keith Murdoch's expose that Australian troops were being needlessly sacrificed by incompetent British commanders on the shores of Gallipoli. The British tried to shut him up but Keith Murdoch would not be silenced and his efforts led to the termination of the disastrous Gallipoli campaign.

Nearly a century later, WikiLeaks is also fearlessly publishing facts that need to be made public.

I grew up in a Queensland country town where people spoke their minds bluntly. They distrusted big government as something that could be corrupted if not watched carefully. The dark days of corruption in the Queensland government before the Fitzgerald inquiry are testimony to what happens when the politicians gag the media from reporting the truth.

These things have stayed with me. WikiLeaks was created around these core values. The idea, conceived in Australia, was to use internet technologies in new ways to report the truth.

WikiLeaks coined a new type of journalism: scientific journalism. We work with other media outlets to bring people the news, but also to prove it is true. Scientific journalism allows you to read a news story, then to click online to see the original document it is based on. That way you can judge for yourself: Is the story true? Did the journalist report it accurately?

Democratic societies need a strong media and WikiLeaks is part of that media. The media helps keep government honest. WikiLeaks has revealed some hard truths about the Iraq and Afghan wars, and broken stories about corporate corruption.

People have said I am anti-war: for the record, I am not. Sometimes nations need to go to war, and there are just wars. But there is nothing more wrong than a government lying to its people about those wars, then asking these same citizens to put their lives and their taxes on the line for those lies. If a war is justified, then tell the truth and the people will decide whether to support it.

If you have read any of the Afghan or Iraq war logs, any of the US embassy cables or any of the stories about the things WikiLeaks has reported, consider how important it is for all media to be able to report these things freely.

WikiLeaks is not the only publisher of the US embassy cables. Other media outlets, including Britain's The Guardian, The New York Times, El Pais in Spain and Der Spiegel in Germany have published the same redacted cables.

Yet it is WikiLeaks, as the co-ordinator of these other groups, that has copped the most vicious attacks and accusations from the US government and its acolytes. I have been accused of treason, even though I am an Australian, not a US, citizen. There have been dozens of serious calls in the US for me to be "taken out" by US special forces. Sarah Palin says I should be "hunted down like Osama bin Laden", a Republican bill sits before the US Senate seeking to have me declared a "transnational threat" and disposed of accordingly. An adviser to the Canadian Prime Minister's office has called on national television for me to be assassinated. An American blogger has called for my 20-year-old son, here in Australia, to be kidnapped and harmed for no other reason than to get at me.

And Australians should observe with no pride the disgraceful pandering to these sentiments by Julia Gillard and her government. The powers of the Australian government appear to be fully at the disposal of the US as to whether to cancel my Australian passport, or to spy on or harass WikiLeaks supporters. The Australian Attorney-General is doing everything he can to help a US investigation clearly directed at framing Australian citizens and shipping them to the US.

Prime Minister Gillard and US Secretary of State Hillary Clinton have not had a word of criticism for the other media organisations. That is because The Guardian, The New York Times and Der Spiegel are old and large, while WikiLeaks is as yet young and small.

Related Topic(s): Extradition; Julian Assange; Media; Truth; Truth To Power; Wikileaks; Wikileaks; Wikileaks Iraq War Documents Ii, Add Tags
Add to My Group(s)
Go To Commenting
The views expressed herein are the sole responsibility of the author and do not necessarily reflect those of this website or its editors.