Lucknow: Just a month old Sakhsham has left no doubt in people’s mind that he is a miracle baby. Separated from his mother at birth when he was delivered on the roadside by his emotionally disturbed mother near Khurramnagar, 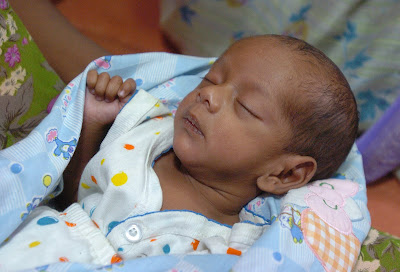 a local residential area in Lucknow, Uttar Pradesh, it took a mammoth effort to reunite the two. And how it was done, is nothing short of miracle itself.

The ordeal for the mother and son began when Sarawasti (as she has been named by the staff of the UP State Legal Services Authority) was brought to Lucknow by some people who wanted to sell her off for a price.

But instead she found herself on the streets in the city, no one knows how. And once there the horrors she was made to go through not only affected her mentally but also rendered her with child. Horribly abused for nine months she roamed the streets carrying her unborn baby until the day March 4 2009, she delivered him on the roadside.

Lying in a pool of blood, the child was spotted by a passerby who drove away the dogs waiting to attack him and brought him to a children’s rescue centre. Since there was no sign of the mother the child was assumed to be a orphan and put up for adoption. Named Saksham , the tiny fellow’s tryst began with his destiny as fate took him every which way but not towards his mother. 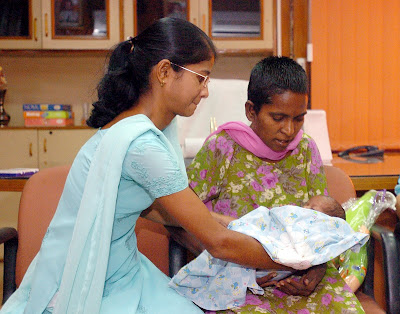 
Says Sudhir Saxena, Member Secretary, UP State Legal Services Authority, who was instrumental in organizing the rescue and rehabilitation of the Saraswati and Saksham, “I thought such things happen only in films, but to see it happen right in front of my eyes is indeed amazing. It is sad the child and his mother had to go through such an ordeal, but I feel the way everyone got together to help reunite them is a positive indication that there is a lot of hope for the cause of child rights in the city.”

Agrees G Shreedevi, Secretary UPSLSA, who carried out the rescue of the mother. Being an Andhraite herself she was able to help people understand Telugu , the language Saraswati was speaking, “Everyone was bent on branding Saraswati mad and mentally retarded. While I knew that she was just very disturbed owing to what she gone through and she told me so in Telugu when I asked her how she came to Lucknow. But it took a great deal of convincing the government run shelter homes and private rescue homes that she was not dangerous or crazy, even then most shelter and rescue homes refused to accept her. Finally after a week we were able to coerce the state run women’s home to provide her shelter for a few days until her son could be reunited with her son and both could be sent back to Andhra Pradesh where Saraswati is originally from.”

But that was easier said than done as the the govt run shelter home refused to keep her just 2 days after her admission there and began to pressurize UPSLSA to remove Saraswati from the home as they felt she was a threat to the other inmates.

Despite eyewitness accounts that Saraswati was in no condition to harm anyone the shelter home superintendent refused to allow her to stay.

With no option left she was removed and taken to the psychiatric ward at the medical university in Lucknow, where she underwent treatment.

Explains SN Tiwari, PS, UPSLSA, who ran from pillar to post trying to arrange a shelter for Saraswati “She could harm no one. She was so weak and in such a bad condition when we picked her up from a tea 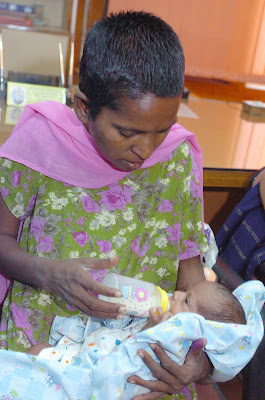 stall where she usually sat. But no one was ready to believe that, all the rescue homes we contacted to request shelter for her turned us away saying she was mad and they could not keep her. It was very sad situation as she kept asking for her child and she knew he had been taken away from her. But until we found a shelter for her it was difficult to reunite the child with his mother. It was a very disturbing situation.”

Bobby Ramakant is a development journalist and has been writing on development issues since 1991. Health is one of the key focus areas he writes on. He is also a World Health Organization (WHO)'s WNTD awardee for 2008
Related Topic(s): Birth; India; Mother; Mother; Rehabilitation; Rights, Add Tags
Add to My Group(s)
Go To Commenting
The views expressed herein are the sole responsibility of the author and do not necessarily reflect those of this website or its editors.