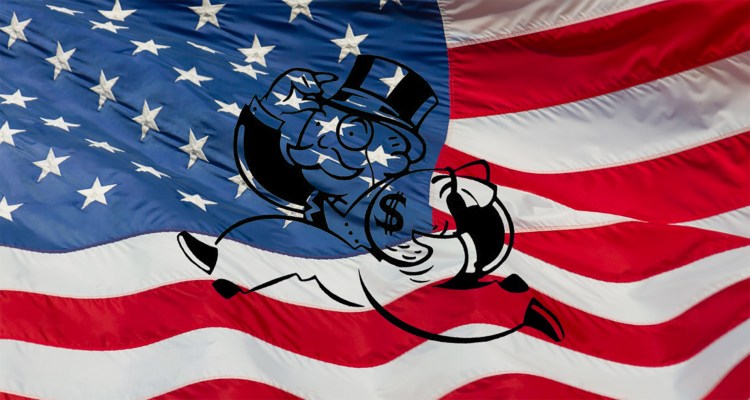 "Don't tax you, don't tax me,
Tax that fellow behind the tree."

Yes, let's do just that! Today, our nominee for "that fellow behind the tree" is the super-rich -- the 0.1%. Over the past 40 years or so, these plutocratic elites have used their political clout to create a radical level of wealth inequality that is tearing our country apart. The gap has become a chasm, separating the lavish fortunes of a privileged few from the well-being of the many. This wealth gap is antithetical to our people's democratic ideals, fundamentally unjust, and socially destructive -- in a word, un-American.

In large part, the fortunate few have amassed and expanded their vast fortunes by hiding in the forest of tax policies that let them avoid paying their fair share. Of course, tax-dodging is complicated, requiring sophisticated techniques and tricky maneuvers perpetrated by a large but secretive industry of pricey tax lawyers, lobbyists, wealth managers, and other fixers to exploit special exemptions, convoluted loopholes, and arcane breaks. This avoidance industry also provides uber-rich clients with a wide selection of underground channels ranging from exotic offshore tax shelters to the ultimate dodge: renouncing US citizenship.

Sorry to sound like old Professor Boring, but I should start this homily on inequality by distinguishing income from wealth. Income is your annual wages or salary as well as earnings from a business, pension, government benefits such as Social Security, etc. As the average US worker's real wages have stagnated for more than a decade, Income disparity has become enormous. The bottom 90% of us average $30,000/year while the top 0.01% and the 0.001% (about 1,400 taxpayers) rake in average annual incomes of $35.1 million and $152 million, respectively. Meanwhile, even mediocre CEOs pocket many millions a year, and the greediest Wall Street hucksters annually amass more than a billion in booty. Until relatively recently, the ethical standard was for workers to gain a proportionate share of the income growth we generate. But in the last dozen years with the rich gobbling increasingly more of the total income pie, the bottom half of Americans now get only 14%.

As gross as income inequality is, however, it's dwarfed by the lesser known wealth disparity that has engulfed our land, mocking our egalitarian pretensions. Wealth is your net worth, the total financial value of every asset you own: your home(s), business, stocks, cash, real estate, autos, yachts, jewels, gold, art, toys, and ... well, everything, minus debts.

The rapidly widening divide between the rich and the rest of us is neither natural nor accidental. During the past half century, myriad corporate and governmental decisions -- from labor law to campaign finance regulations -- have methodically slanted America's economic and political systems so that money and power flow from the many to the few. The plutocrats' most effective and least reported-on tool is America's tax structure.

For most of us -- workers, professionals, farmers, small business folks, etc. income taxes are generally straightforward. The rich are different. Multimillionaires and billionaires don't usually draw the bulk of their fabulous incomes from paychecks, but from their enormous financial assets, i.e., their wealth. This inherited or accumulated wealth generates "capital income" -- and further wealth -- with little or no work by the asset holder.

As the Center for American Progress's excellent June report details, the moral basis of US tax policy has been perverted since the 1980s by legislative and regulatory twists that tax work, but let these massive accretions of wealth skate by virtually untouched. As a result...

America's tax code no longer adheres to the core principle of ability to pay -- the idea that taxes should be based on a person's capacity to pay taxes.

Thus, the ultra-rich, who benefit the most from our country's economy and public infrastructure, pay the smallest proportion of their incomes to sustain it.

Today's tax laws offer a carnival of loop-the-loops, whirligigs, and other tax-free joyrides for those who've stockpiled capital income. For example, while you might pay the top tax rate of 37% on ordinary income, someone selling a capital asset like stock pays only a 20% tax on income from that sale. Nearly 70% of such capital gains are made by America's richest 1%, who reap trillions of dollar a year in savings through such special tax treatments. This windfall allows them to amass and concentrate even more of America's wealth in their sheltered accounts and to buy the political clout to push through laws that the great majority oppose -- such as 2017's Trump-McConnell trillion-dollar tax giveaway to the rich. (Facing overwhelming public opposition, the GOP wrote the bill behind closed doors, allowed no public hearings, and rammed it into law on a partisan vote.) And 'round and 'round it goes ... unless and until we stop it. 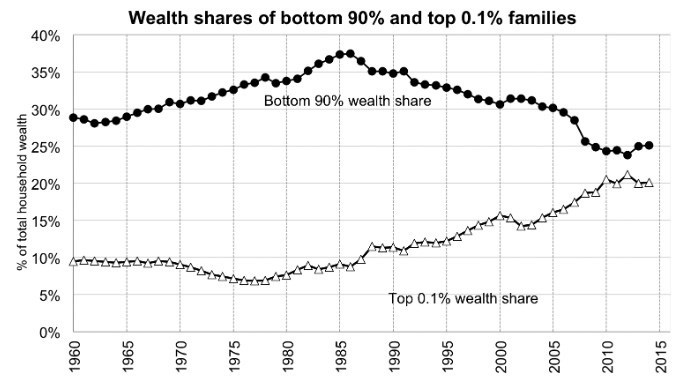 America needs a "Lizzie"a way to re-balance the tax burden fairly between wages and wealth. Sen. Elizabeth Warren has taken the lead on this fundamental democratic reform by proposing a return to America's historic tax principle of "ability to pay." Her idea is to shut down the elites' shameful tax dodging with a straight-forward tax on extreme wealth.

Related Topic(s): Billionaires; Economic; Economy; Poverty; Taxes; Wealth Inequality, Add Tags
Add to My Group(s)
Go To Commenting
The views expressed herein are the sole responsibility of the author and do not necessarily reflect those of this website or its editors.