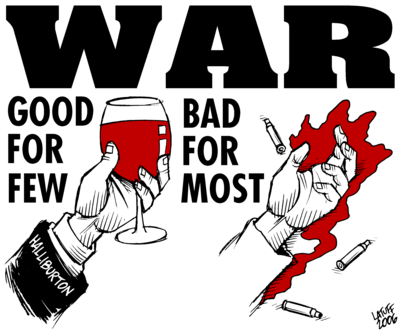 While media attention in recent weeks has been fixed on the partisan food-fights leading to the President's impeachment, some hard news has also managed to seep out. On October 21, 2019, The New York Times reported that, despite President Trump's campaign promises to end America's "endless wars," no wars have ended under his administration and more troops have been deployed to the Middle East in recent months than have come home. More recently, on December 12, CNN reported that the Trump administration was considering sending 4,000 to 7,000 additional troops to the Middle East in response to an "increased chance" of provocations by Iran against U.S. interests in the region. It was not mentioned, of course, that any such provocations would almost certainly be in response to U.S. economic sanctions that the President has proudly hailed as the severest ever imposed. Because of them, it is expected that, in Iran's next fiscal year, revenue from oil exports, the very lifeblood of its economy, will be reduced by 70 percent. We've also recently learned that the U.S., having failed to contrive the overthrow of the populist Maduro regime in Venezuela, has attempted to intervene in yet another poor country in South America. According to a November 2019 Grayzone report, the U.S. collaborated with the Organization of American States to oust Bolivian president and indigenous people's champion Evo Morales. Following weeks of pressure and extremist violence, Morales was forced to resign under duress on November 10.

What is evident from these figures is that the U.S. has created, and seeks to maintain by various measures of force, a worldwide empire of power that can protect and even extend the range of its own strategic, economic, and ideological interests. This approach to foreign relations has not only helped make the U.S. by far the richest country in the world (as measured by total GDP), but also one of the safest from retaliation by foreign states. But the approach is also morally egregious. As the U.S. pursues its dark version of "America First," it necessarily threatens or imposes on the people of lesser nations the insecurities of sectarian or factional infighting, the misery of economic sanctions, or the death, displacement, and suffering of war. In light of this flagrant injustice, the question is, Why does the U.S. continue to flaunt its military power around the world?

The Role of "American Exceptionalism"

According to Peter Beinart, a professor of journalism and political science at the City University of New York and a contributing writer at The Atlantic, the answer to that question has its roots in the familiar idea of "American Exceptionalism." It is the notion that America's values of freedom, democracy, the rule of law, capitalist enterprise, and equal opportunity are uniquely worthy, thereby justifying an active U.S. role in promoting their adoption by other nations of the world. Beinart, who has also become a prominent progressive thought leader on U.S. foreign policy, expounded on that view in a recent interview. It was conducted by the Responsible Statecraft publishing arm of the Quincy Institute, the newly founded Washington think tank that seeks to promote "ideas that move U.S. foreign policy away from endless war and toward vigorous diplomacy in the pursuit of international peace." The interview was edited for print publication by Ben Armbruster, the managing editor of ResponsibleStatecraft.org.

In Beinart's view, the notion that America is a special nation destined to do great things, and that it has a special mission to make the world a better place, has been distorted in ways that lead the country to intervene militarily around the world rather than seek solutions to conflict through diplomacy. The distortions reflect undue influence by the military and arms manufacturers; overzealous partisanship that often leads to contests of political "toughness"; willingness to punish the alleged misdeeds of governments--say those of China, Russia, Iran, Venezuela, or North Korea--regardless of the cost to their people; and allowing a certain discourse about a particular country, say Israel, to set preconditions for relations with other countries, say Saudi Arabia, Iran, Yemen, and Egypt.

Beinart also points out the lack of an institutional infrastructure that can effectively challenge this misuse of power. The mass media, he says, amply illustrate this. Having little expertise in foreign policy, their reporters tend "to gravitate toward people who seem to have respectable, elite, prestigious credentials"--which the DC foreign policy establishment can readily provide to ensure that a benign slant is presented to the public.

Beinart had not always been a skeptic of American foreign policy. He reveals that, when U.S. military interventions in Bosnia and Kosovo appeared to go pretty well, and in the case of the Balkans actually appeared to be saving people's lives, this seeming evidence of America's moral superiority and the efficacy of American military power led him and others in his age group to become liberal hawks.

"I think the really formative experience [for me], Beinart explains, "was the end of the Cold War and this sense of what in retrospect was clearly triumphalism. But I wouldn't have used that word at that time. At that time I think I thought that it was important that liberals start recognizing the clear moral superiority of the American system to its dictatorial opponents. And that ideological self-confidence, I think over-self-confidence in retrospect, became married to an excessive faith in the capacity of the American military.

Given this background, Beinart had supported the U.S. invasion of Iraq in 2003. Shortly thereafter, however, he became one of only a few supporters to seriously grapple with the failures of its intellectual underpinnings.

In a 2010 book aptly titled "The Icarus Syndrome," Beinart found parallels in the last 100 years of American foreign policy to the hubris displayed by the Greek god Icarus, son of the mythical inventor Daedalus. Imprisoned for a crime in a labyrinth of his own making on Crete, Daedulus had made wings of feathers and wax for himself and his son to escape the island by flight. As Icarus rises to the heavens, however, he feels so full of himself that he dares to challenge his father's warning not to fly too close to the sun. When he does so, the wax on his wings soon melts and he plunges to his death in the sea.

In the Quincy interview, Beinart described the book as follows:

It was "an effort to try and go back and look at the last 100 years of American foreign policy. I went from World War I through Vietnam. I was really interested in the people who supported American intervention in World War I and people who had supported the war in Vietnam and then had to deal with the intellectual and moral wreckage of the failure of those visions. And I think the heroes of that book are Morgenthau, Kennan, and Lippmann, even though in some ways they're not all such admirable characters. But it was their intellectual journey starting in the aftermath of World War I and then leading to their grappling with the aftermath of Vietnam, it became for me the template."

Beinart reserves a special place in the maturation of his thought for Reinhold Niebuhr (1892-1971), the American Reformed theologian, ethicist, and commentator on politics and public affairs who had been a professor for more than 30 years at Union Theological Seminary. "[He] became for me like a bit of a life raft, Beinart noted in the interview. "I know people do all kinds of different things with Niebuhr, but for me his core insight is that nations, like individuals, cannot see the degree to which self-interest corrupts their notion of virtue. They may genuinely believe that they are high-minded. But just like individuals think they're high-minded and can't see how much of their behavior is based on self-interest, they can't see themselves from the outside and nations have trouble doing that too. And that became a way to help me start to have a more skeptical eye about all this Exceptionalist discourse that I think still defines a lot of American foreign policy."

For Beinart, such skepticism is compatible with one of the Quincy Institute's founding principles, "transpartisanship." He concedes that getting progressives and conservatives to work together toward a less militaristic foreign policy based on restraint and diplomacy is going to be very difficult, particularly because it appears the GOP has jettisoned many of its principles to protect Donald Trump. But, Beinart adds, there is a conservative as well as a progressive critique to American hubris and overreach. "[I]f you believe that the government is not likely to be able to intervene and reengineer effectively problems at home, you should be even more dubious about the United States' ability to do that halfway across the world. So I think there is a coherent view there."

In retirement, Bob Anschuetz has applied his long career experience as an industrial writer and copy editor to helping authors meet publishing standards for both online articles and full-length books. In work as a volunteer editor for OpEdNews, (more...)

Why Obama Is Necessarily Disappointing Us, and What We Can Do about It.

THE CHALLENGE OF THE CONSERVATIVE MINDSET

We Need a Progressive Primary Challenge to Obama in 2012!

A VIEW FROM THE PROGRESSIVE SIDE: Ayn Rand's Despised "Altruism" Is Essential to Building a NATION of "Producers."

It's Time for a New U.S. Foreign Policy Committed to Diplomacy and Peace

Progressives Need To Stand for Something Positive and New: the Broad Common Interest, Not Narrow Special Interests.