A hunger-torn human being seeks bread and butter, rather than things to be used for ornamentation. He has a greater inclination to eat fruit for energy than to look for beauty in flowers. In the same way, Pakistanis find themselves in circumstances where flowers in the form of change seem irrelevant. What they need at present is the tranquility and peace to lead a life.

The head of Pakistan Awami Tehreek (PAT), Dr. Tahir ul Qadri, has landed in Pakistan to change the system and provide its people basic rights. He says his concerns are for the welfare of 200 million people who are victims of an ongoing exploitative political system. 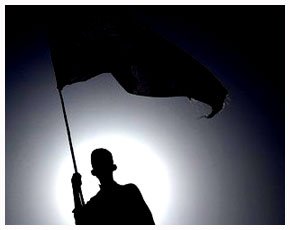 Engaging in struggle to provide for a people's basic rights is a cause that makes sense and appeals to the people, at least as it applies to the situation in Pakistan. Nevertheless, in an historical context, such a cause may be seen as self-serving.

At present, Pakistan faces a host of complex challenges that threaten its survival. They consist of internal problems exacerbated by external factors. Militancy has crept into the state's veins and arteries. Operation Zarb-E-AZAB, launched on June 15 with the aim of clearing the trenches of North Waziristan, is a matter of great seriousness. In a time when the nation needs to be put on a pathway to unity, undertaking such a campaign can only result in weakening the state.

Ironically, the PAT Chairperson, who announced his intention to change the system and declared his campaign as pro-democracy, is in fact a citizen of a foreign country. In that status, he loses the right to invoke such cliches. In fact, this person was part of the controlled cabinet of General Musharaf, and ratified some controversial decisions made by the military dictator. PAT was never seen then to raise a finger against the unconstitutional overthrow of a democratic government in 1998.

More surprisingly, the PAT Chairperson participated in the 2002 election and was given a seat in the National Assembly--though, at that time, the system was not seen as manipulative of the people's basic rights. More dangerously, the self-proclaimed champion of change seeks coordination with the Chaudhry Brothers, notorious for corruption and endorsing anti-democratic military rule. Given these sad features of his political career, the Chairperson's alleged campaign to meet the basic needs of the people seems wholly suspect.

Actually, the ruthless massacre of Pakistanis reached its apex during the Musharaf and PPP eras. The prices of commodities during that period soared day by day. The growth rate in all the macro and micro spheres of the economy experienced decline. As seen from any angle, these previous regimes were abysmal for Pakistanis. In such circumstances, an agenda for change directed to the public betterment seemed called for. Nevertheless, Qadri's party made no effort to pursue change.

In contrast, the Sharifs, who themselves cannot be viewed as strong proponents of democracy, have remained popular in the hearts and minds of the people, despite Musharaf's decade-long autocratic rule and ruthless policies against them. In reality, the dictator used every tool available to try to exterminate them. However, they came back, ruled for five years in Punjab, and then leveled the ground in the Federal Government by winning a remarkable popular mandate and defeating the less-productive government led by PPP.

The current political program of the PAT will not assuage the miseries of Pakistanis. Regrettably, however, it will make even more intractable the quagmire Pakistan is currently passing through. If Dr. Qadri were to be assassinated--though such an event is not desired--the PAT's most ardent partisans would respond to the event with either apathy or antipathy. They should remember the fact that the TTP was formed after the LAL mosque was destroyed by bombing, along with the knights who were keen to change the system at gunpoint. The PAT rabble-rousers are unlikely to consider that, while the government engages in fierce operations against TTP, a new scourge will not be a part of the change produced.

Moreover, if PAT succeeds in creating a situation in which the Army topples the elected government and comes to power, this would not change the system, as is secretly desired, but instead merely change the power-mongers. Following this, the country's national defense capability vis-a-vis its adversaries would be weakened, creating a situation for which the enemies of Pakistan wait with jaws open, daggers sharpened, and plots ready to execute.

PAT should understand the severity of the dangers Pakistan confronts. It should seek to play a constructive role in the reconstruction of a dilapidated Pakistan, instead of going off in other directions. If the PAT Chief is sincere in his statements about seeking change for the betterment of the people, he should utilize the influence and sources he enjoys in the West to help brilliant Pakistani students complete their higher education abroad.

Related Topic(s): Pakistan, Add Tags
Add to My Group(s)
Go To Commenting
The views expressed herein are the sole responsibility of the author and do not necessarily reflect those of this website or its editors.