Rising air temperatures remind us that our bodies have real limits. 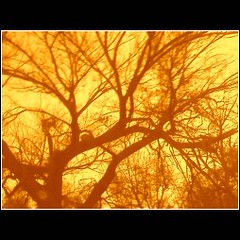 climate heating up
(Image by starplanejournal from flickr)   Details   DMCA

It's hard to change the outcome of the climate crisis by individual action: we're past the point where we can alter the carbon math one electric vehicle at a time, and so activists rightly concentrate on building movements large enough to alter our politics and our economics. But ultimately the climate crisis still affects people as individuals -- it comes down, eventually, to bodies. Which is worth remembering. In the end, we're not collections of constructs or ideas or images or demographics but collections of arteries and organs and muscles, and those are designed to operate within a finite range of temperatures.

I happened to be talking with Dr. Rupa Basu, the chief of air-and-climate epidemiology at California's Office of Environmental Health Hazard Assessment, on Friday, a day after Palm Springs had tied its all-time heat record with a reading of a 123 degrees Fahrenheit. That's hot -- hotter than the human body can really handle. The day before, with temperatures topping 100 degrees before noon, a hiker in the San Bernardino National Forest had keeled over and died. "We talk a lot about biological adaptability, but as humans we're not supposed to adapt to temps that high," Basu said. "If your core body temp reaches 105, that means death can be imminent. As humans, we can only adapt so much. Once the air temperature is above 120, there's only so much you can do, except rely on air-conditioning and other mitigation strategies. And that puts a lot of pressure on the power grid, and that could result in brownouts and blackouts. It's not really a long-term, chronic solution. It's just living for the moment and hoping it works."

And often it doesn't work. Last summer, Basu published a remarkable paper, a "systematic review" of research on pregnant women. The studies she looked at -- which collectively examined more than 32 million births -- found that higher temperatures in the weeks before delivery were linked to stillbirths and low birth weights. "It's weeks 35 and 36 that seem to be the trigger," she told me recently. "What we think is happening is that a lot of the mechanisms from heat-related illness start with dehydration. If there are symptoms of dehydration, those might be overlooked. If someone doesn't connect it with heat, they might not get to a cooler environment. You see vomiting -- and people might say, 'That's O.K. Bound to happen when you're pregnant.' But it's because of the dehydration." Further along in the pregnancy, she said, "your body releases oxytocin, which triggers contractions. And if it happens prematurely -- well, heat raises the level of oxytocin faster. If you're not able to thermo -- regulate, get the temp down, it can trigger low birth weight or, earlier on, miscarriage or stillbirth." Past a certain point, the body diverts blood flow to the subcutaneous layer beneath the skin, where the body's heat can radiate out into the air. That diverts the blood "away from vital organs," Basu said. "And away from the fetus."

The brain is an organ, too. For all its metaphysical magnificence, it's a hunk of cells that comes with operating specs. Again, don't let its temperature get too high: in 2018, Basu published a study showing the effect of seasonal temperatures on mental health. A 10-degree-Fahrenheit jump in temperature during the warm season was associated with an increase in emergency-room visits for "mental-health disorders, self-injury/suicide, and intentional injury/homicide" of 4.8, 5.8, and 7.9 percent, respectively. Those are big numbers, and the search for mechanisms that explain them is fascinating. Among other things, certain medications impede the body's ability to thermoregulate: beta-blockers, for instance, decrease the flow of blood to the skin, and anti-depressants can increase sweating, Basu told me. "There's also some evidence to show that heat affects neurotransmitters themselvesthat everything is just a little bit slower."

Both these effects show up more strongly in this country in Black and Hispanic patients -- probably, as Basu explained, because those groups disproportionately live in low-income neighborhoods. "They're often in areas where there are more fossil-fuel emissions, fewer green spaces, and more blacktop and cement, which really absorbs and retains the heat," she said. "And also living closer to freeways. That exacerbates air pollution. And, with the heat, that's a synergistic effect. It's environmental racism that leads to these differences in exposure." Some people, she added, bristle at hearing that: "Someone said to me, 'Oh, so now we're breathing different air?' And I said, 'Yes, that's exactly right. We can track it down to the Zip Code level.' " Call it critical race epidemiology."

Which leads us, of course, back to politics. There's only so much that doctors can do to help us deal with heat; ultimately, it's up to the Joe Bidens and the Joe Manchins -- and the Xi Jinpings -- of the world. "We're seeing these kinds of extreme temperatures in Palm Springs right now," Basu said. "If we start to see those in more populated areas, imagine the public-health impact." That's obviously what's coming. Last week, researchers at NASA and NOAA found that, according to satellite data, "the earth is warming faster than expected" and that the planet's energy imbalance -- the difference between how much of the sun's energy the planet absorbs and how much radiates back out to space -- has doubled since 2005, an increase equivalent to "every person on Earth using 20 electric tea kettles at once." And the National Weather Service is forecasting a heatwave this week for the Pacific Northwest that could smash regional records.

Amid the endless deal-making -- the U.S. last backed off what would have been a G-7 plan to end coal use -- the human body is a useful bottom line. "I think what we need to do is prevent the warming," Basu said, when I asked her for a prescription. "So it doesn't get that hot."

Bill McKibben is the author of a dozen books, including The End of Nature and Deep Economy: The Wealth of Communities and the Durable Future. A former staff writer for The New Yorker, he writes regularly for Harper's, The Atlantic Monthly, and The (more...)
Related Topic(s): Heat Wave; Heating; Ideas, Add Tags
Add to My Group(s)
Go To Commenting
The views expressed herein are the sole responsibility of the author and do not necessarily reflect those of this website or its editors.