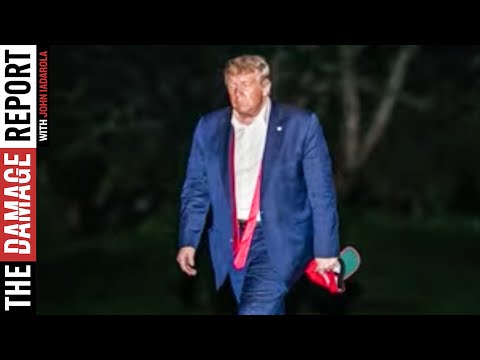 Trump does the walk of shame following his failed rally in Tulsa.
(Image by YouTube, Channel: The Damage Report)   Details   DMCA

Trump has been saying for some time that he wishes there was less testing for coronavirus in America, because that would reduce the number of cases that we find, which would improve, in his mind, his numbers compared to other countries.

So yesterday the Center for Disease Control, under pressure from the White House, revised their guidelines to say that you should only be tested if you were physically sick. They made the decision while Anthony Fauci was unconscious under general anesthesia having minor surgery on his throat.

This decision will make it harder for people to get coronavirus tests, and will make it very difficult for people who are not hospitalized to have their insurance companies pay for those tests.

This is crazy. Half of people who get this disease and more than half of young people who get it, don't have symptoms but are still wildly infectious.

Apparently Trump is betting that the massive spread of disease from this policy won't happen until after the election, as there is a 1- to 2-month delay between initial infection and hospitalization and death.

Maybe he's thinking that he can leave all these dead people to Joe Biden. Or maybe he just doesn't care as long as it makes things seem better over the next month or two and thus wins him the election, which is the most likely explanation.

This administration has politicized everything from policing to national security to public health, and Americans are dying, both here and overseas, as a result.

To describe the modern Republican Party as a "death cult" is pretty accurate.

Whether it is tearing children from their families and letting many of them die or be sold, promoting policies that caused nearly 200,000 Americans to die from this virus, or encouraging deadly violence against people protesting racism, Trump and the GOP are all in on brutality, violence and death.

They even had serious conversations in Cabinet meetings about installing "flesh piercing" spikes on the border wall, using a "microwave heat ray" against people seeking asylum in the United States, and building moats with alligators while shooting migrants in the legs for the TV cameras.

The question now is, "Will Americans who have fallen sway to this cult begin to wake up, or will the Trump cultists be able, using Facebook and lies on Fox News and the media, to get even more Americans into their cult?"

Related Topic(s): Coronavirus; Death; Health; Testing; Trump Against Democracy; Trump Cruelty; Trump Cult, Add Tags
Add to My Group(s)
Go To Commenting
The views expressed herein are the sole responsibility of the author and do not necessarily reflect those of this website or its editors.