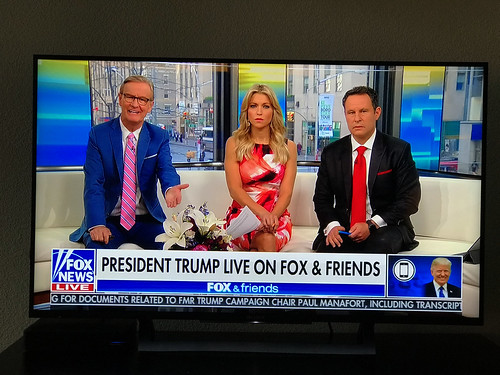 The key to the power of any dominant ideological paradigm, and by extension, the modality of the government of the day, is the sturdiness of the belief structures held by its constituents. In order for these sets of beliefs to remain steadfast, those of the ruling class have allowed the progenation of a limited array of large media corporations to both initiate and dominate the public narrative. These corporations decide what information is permitted to reach the minds of the populace, and how it is presented to the mind. We all know that the framing of a question can alter your perception of the correct answer to it, and so information isn't value-neutral, its delivery brings with it the cargo of connotations and tacit implications.

There is a big problem, however, with the structure of the information industry and it relates to the importance of the integrity of the information and its distribution. In order for a democracy to serve the interests of its constituents well, the voters must not only be well-informed in the sense that they have enough information to make a reasonable decision on which ideological party to put their trust into, but they also must have a strong understanding of the fundamental principles on which a government should operate. These principles extend beyond simple notions of basic human rights and needs, into the principles upon which economic analysis is conducted. It is indeed hard to quantify just how much of a government's legislation is directly, or indirectly, economic in nature and focus, but it is clearly a massive majority of it. So if the population has very little, or indeed, an outright fallacious view, on fundamental economic principles, how can they be expected to vote for the party that will act in their interests, as opposed to the interest of a tiny elitist minority, who have the power to propagandise their views through the hegemonic corporate media?

When the dominant information centers of society are in the hands of elite, vested interests, the information that is distributed to the public becomes inevitably tainted and leaning towards the dominant, but fallacious, economic paradigm that is termed "neoclassical", and over time, can generate severe distrust not only in these institutions of the media, but of institutions in general. We are seeing this phenomenon first hand with the crusade against "fake news" in the United States, and while the corporate media in the United States is certainly guilty of the so-called "fake news", the accusations of "fake news" have increasingly been levelled at what seem to be incontrovertible facts. So the right wing has been able to deny the worst aspects of their torrid behaviours simply because the media themselves have been so corrupt, for so long, that ordinary people can no longer trust their own ears and eyes. In this kind of environment, anything goes ideologically. All ideologies are legitimised because any counteranalysis can be dismissed as fake news. Everyone is allowed to indulge their own ideological echo chambers without any guilt, because the mainstream alternative is corrupt. Of course, the dangers of echo chambers are self-evident; they exclude the presence of the countervailing arguments necessary to challenge fallacious views. The result? A divided society where ordinary people, who in all likelihood have very similar self-interests, believe "the other" groups are evil or stupid, and by extension become their political enemies.

You could even argue this is somewhat intentional since it does look a lot like the "divide and conquer" strategy, but regardless of the intentfulness behind the outcomes of the "fake news" media, it is clear that this structuring of the information industry is malignant. In order to tackle such a problem, which has now become clearly unignorable, we have to look at the root causes of the issue; the vested interests that lie behind the ownership of the media.

Whether you are right or left, it should be obvious that allowing people who have a vested interest in governments having a particular ideological adherence, and that this vested interest is largely at odds with the vast majority of the populace, controlling the creation and distribution of society's information, is a dysfunctional and prohibitive mechanism against the blossoming of democracy into its stated goal; which is to allow the general populace to have their interests tended to. If you accept this argument, then it stands to reason that the ownership of these vital institutions of democracy must be in the hands of ordinary people, as opposed to being controlled by the elites.

The question then becomes whether to nationalise or co-operatise these media institutions. I'm sure a mixture of these solutions would be ideal; national broadcasters have easily controlled, and in an indirect way, democratically controlled, mandates, which can serve national needs for information distribution. These might include emergency warnings for natural disasters, sporting events which are widely popular, but are too expensive for the newly socialised media institutions to attain the rights to, foreign language services for immigrants, basic cultural programming, scientific education and the list goes on. But it is also evident that a decentralised media is important for ensuring a diversity of views reaching the minds of public and to ensure particular events are not easily blacked out from the public conscious. So the existence of worker-owned media organisations, where journalists both share in the profits of their enterprise and vote for their own editors, becomes a vital component of the information ecosystem. This idealisation of the socialisation of the media does not necessarily imply that the entirety of the economy should be socialised too, because the argument for this particular socialisation revolves around a so-called "public good", which is information in this case. And so, even right wingers could see the merit behind this proposal. What is especially attractive in this proposal for the left, is not just a "win" in achieving a portion of their political and ideological goals, but also in ensuring that journalists can experience first hand the benefits of socialisation in that they will have more power over their own workplace and will take home more dough for the family. This will almost certainly win over many previously skeptical centrist and right wing journalists to socialistic ideologies, and in doing so, the nature of the information they distribute to the public will alter in a way that is either more sympathetic to leftist causes or to being outright supportive of them.

The information distributed to the minds of the populace being tinged with the views of ordinary people who benefit from leftist policy, is vital. It is vital not only for sake of a countervailing view to be proffered in opposition to the horribly fallacious nature of corporatist propaganda, it is vital for the populace themselves to finally be offered a genuine account of a truly leftist policy from the point of view of an ordinary person. It might just finally break the anti-left intuition that has been nurtured from birth in the regions most affected by the hegemonic corporatist propaganda. It is time to co-operatise the media.

I'm an undergraduate student of Mathematics and Computer Science at UNSW, a member of the Australian Greens and activist organisations GetUp! and Extinction Rebellion.

Related Topic(s): Socialisation, Add Tags
Add to My Group(s)
Go To Commenting
The views expressed herein are the sole responsibility of the author and do not necessarily reflect those of this website or its editors.

Is It Time To Co-operatise The Media Industry?