Depending on how you define the word country, there are between 190 and 350 countries in the world and roughly half of the 190 claim to be democracies. The United States takes pride in being the worlds oldest democracy and sometimes even makes claim as being the worlds greatest democracy.

But the U.K.'s Economist Intelligence Unit ranks the United States in twenty-fifth place among the world's democratic countries, well below the U.K., itself only in fourteenth place. But even Uruguay, Mauritius and Costa Rika are reported as being better democracies than the U.S. Among the nations that the EIU categorizes as flawed democracies, the United States does better of course, ranking in third place, lower only than South Korea and Japan.

I've read that in the early nineteenth century there was considerable focus in this country, directed toward improving our nascent democracy. Though our democracy still has ample room for improvement, it does seem as though the fervor for tinkering with and improving it has largely vanished. Many among our population persist the illusion that our democracy is as good as it gets and has no room to improve. That illusion may well be what has led our democracy to quietly decline to it embarrassing position in twenty-fifth place.

What qualifies to be a democracy is a matter for debate of course, but often we default to thinking that a democracy is simply a country that has elections. And yet we would not think of the former Soviet Union as a model democracy whether or not they held elections. Our objection would be that there was only one party and so elections were mere formalities. Few people actually believe, on reflection, that simply having elections is enough. At the very least, in a democracy voters should not be limited to a single option.

Taking a minimalist position, in the United States, most of our elections offer us the bare minimum of just two choices; sometimes there are a few more but most people are aware that is simply for amusement. In reality there are only those two candidates that our media informs us the viable candidates; any others are simply insignificant window dressing. But if allowing two candidates is more democratic than just one then why not three or four? Might this be a key to further improving our democracy.

Restructuring our voting system so as to open our political system for wider participation than just two parties has been an recurring theme in this series of articles. Since our Constitution leaves elections, including voting methods, up to each state, allowing for more political parties will necessarily be a long-term evolutionary process. Because of the electoral college and also because of the twelfth Amendment, that kind of change in our presidential elections will be especially difficult to achieve. But that knowledge should not prevent us from taking steps to repair all of our many other elections, importantly including even presidential primary elections.

Recent experience with our government should encourage us think that more parties in real competition would be worth trying. When our only two parties share many of the same objectives and opinions on issues, such a limited choice seems not so much different than having a single party system.

There are people who defend the two-party system, however, and I have been putting some effort into understanding their position. At this point, it seems to me that it mostly come down to a basic distrust of democracy (which I would define as a government that is above all, responsive to the will of its people). That is a somewhat vague definition of course. Many points of view are suppressed and given no voice at all. 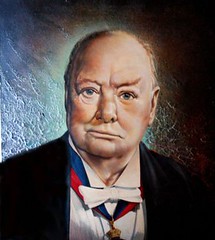 The best argument against democracy is a five-minute conversation with the average voter.

It is not clear on how one finds an average voter to test that notion, but I suspect Churchill was thinking of one or two particular voters, perhaps that he encountered in a pub. On that same basis there is as much reason to fear rule by the rich or famous.

But distrust of democracy is as clear as it is real. We have all met people who, at the mere mention of democracy, will point out (seemingly as a point of pride) that what we have is not a democracy but rather a republic. And there are even some who argue for a unitary executive, effectively a monarchy rather than a democracy but with term limits. Clearly, not everyone favors democracy, but still, that remains very much a minority position in the American culture, so trained as we are in the belief that we live in the best democracy that is the worlds greatest.

In those earlier days, Senators and Congressmen lived, at least much of the time, in Washington. They regularly socialized and even across party lines. They developed friendships and they often worked cooperatively with each-other, despite being in different (though arguably more similar) parties. But today, with the advent jet travel, these politicians often stay only a few days a week in Washington and the social structure that used to lubricate their interactions has largely broken down. Missing is the little cooperative spirit that then crossed party lines. Now, the political class has concluded that the only path to accomplishment is for their own party to achieve complete domination of the government. This conclusion has led to an unhealthy polarization that has infected not only Washington politics but the media and the population of the country at large.

But imagine that we had a Senate or House composed of members of many different parties, some even just statewide parties. Hope that any single party could possibly come to dominate government would fade away, just as would animosity for members of other parties. In that environment there would be no alternative to cooperation across party lines to accomplish anything at all. Rather than more gridlock, the presence of more viable parties would become the new grease making cooperation again the rule in these important legislative bodies. With many parties, there could be a confluence of interest on some issues but not on others so coalitions would form on an issue basis rather than on the basis of strict party discipline. Even two parties who are polar antagonists on their particular motivating issue (say Mississippi's Right-to-Life Party and Massachusetts' Choice Party) might well find common ground on many unrelated matters (such as Foreign Aid or public safety).

A concerned citizen and former mathematician/engineer now retired and living in rural Maine.
Related Topic(s): Democracy Awakening; Democracy Decay; Elections; Gridlock; Politics; Voting, Add Tags
Add to My Group(s)
Go To Commenting
The views expressed herein are the sole responsibility of the author and do not necessarily reflect those of this website or its editors.