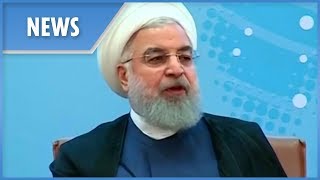 Donald Trump to Iran President: .YOU WILL SUFFER..
(Image by YouTube, Channel: The Sun)   Details   DMCA

The Iran Agenda Today: The Real Story Inside Iran And What's Wrong with U.S. Policy By Reese Erlich

Want another thing to keep you up at night?

Consider a conversation between long-time Middle East reporter Reese Erlich and former U.S. ambassador to Saudi Arabia, Charles Freeman, Jr. on the people currently directing the Trump administration's policy toward Iran. Commenting on National Security Adviser John Bolton's defense of the invasion of Iraq, Freeman says "The neoconservative group think their good ideas were poorly implemented in Iraq," and that the lesson of the 2003 invasion that killed upwards of 500,000 people and destabilized an entire region is, "If at first you don't succeed, do the same thing again somewhere else."

That "somewhere else" is Iran, and Bolton is one of the leading voices calling for confronting the Teheran regime and squeezing Iran through draconian sanctions "until the pips squeak." Since sanctions are unlikely to have much effect -- they didn't work on North Korea, have had little effect on Russia and failed to produce regime change in Cuba -- the next logical step, Erlich suggests, is a military attack on Iran.

Such an attack would be a leap into darkness, since most Americans--and their government in particular--are virtually clueless about the country we seem bound to go to war with. Throwing a little light on that darkness is a major reason Erlich wrote the book. For over 18 years he has reported on Iran, talking with important government figures and everyday people and writing articles on the country that increasingly looks to be our next little war. Except it will be anything but "little."

History matters when it comes to life and death decisions like war, but unfortunately, one of the mainstream media's glaring deficiencies is its lack of interest in the subject. If newspapers like the New York Times had bothered to read Rudyard Kipling on Afghanistan or T.E. Lawrence on the British occupation of Iraq, the editors might have had second thoughts about supporting the Bush administration's invasions of those countries. Of course, this was not just the result of wearing historical blinders. As Erlich points out, the mainstream media almost always follows in the wake of American foreign policy, more cheerleader than watchdog.

But if that media learned anything from the disasters in Central Asia and the Middle East, it is not apparent when it comes to its reporting on Iran. Most Americans think that country is run by mad mullahs who hate the U.S. and is -- in the words of President Donald Trump -- a "terrorist nation." Americans don't hold that image of Iran by accident, but because that is the way the country is represented in the media.

The fact that the U.S. government (along with some help from the British) overthrew Iran's democratically elected government in 1953, and backed Saddam Hussein's attack on Iran in 1980 that resulted in over a million casualties has vanished down the memory hole.

Related Topic(s): Iran; John Bolton Warmonger; Rumor; Sanctions; Violence-War; War Mongers, Add Tags
Add to My Group(s)
Go To Commenting
The views expressed herein are the sole responsibility of the author and do not necessarily reflect those of this website or its editors.