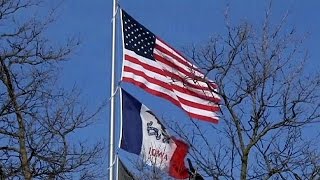 The proposal, passed late Thursday by the Iowa Democratic Party (IDP) central committee, will allow any organizer to apply to the IDP to hold a precinct caucus on February 3, 2020. The party will review that proposal, so it doesn't conflict with other sites.

Inside the state, satellite caucuses could include factories with shift workers, nursing homes for the elderly, and college and university campuses, said Troy Price, IDP chairman. Outside Iowa, those sites could be abroad -- where troops and residents live -- and in snowbird communities, such as in Florida and Arizona, Price said. Any eligible Iowa voter could show up, register and participate.

"If you are an Iowa Democrat, but not registered in-state, you can register to vote at the point of participation just like in our precinct caucuses," Price said. "Despite all of the challenges that we have faced here over the last four weeks in developing our new plan, we remain on target to have a tremendously successful caucus."

The prospect of satellite caucus sites follows the DNC's Rules and Bylaws Committee's (RBC) decision in August to not go forward in 2020 with virtual voting in the Iowa and Nevada presidential caucuses, citing security and reliability issues. The online voting option was initiated as a way to expand participation in 2020's first and third presidential nominating contests.

Party officials and activists in those states and Washington, D.C., criticized the RBC's decision. They disagreed with cybersecurity and reliability concerns, even though these new absentee voting systems had not yet been fully developed and tested by August. Several vendors were developing the internet-based systems.

The RBC decision sent both states scrambling. Nevada had been planning to have early voting sites and special precincts -- those on the Las Vegas strip for hotel workers. It will continue that practice to expand participation options. It appears that Iowa is borrowing from that approach for 2020 by initiating satellite precincts. Any organizer could apply to the IDP to stand up a caucus site.

"The kind of proposal that Iowa's making is the sort of thing that we were looking for," he said. "I know it's the second attempt and it's been difficult... I just wanted to note the accomplishment and thank Iowa for going the extra mile and delivering this kind of advance in making the caucuses more accessible to more people."

The Rules Committee will meet again in about two weeks to reviews the final three states where review of the 2020 plans has been postponed: Alaska, Hawaii and Kansas. These states are considering new ways to boost participation.

Steven Rosenfeld  covers democracy issues for AlterNet. He is a longtime print and broadcast journalist and has reported for National Public Radio, Monitor Radio, Marketplace,  TomPaine.com  and many newspapers. (more...)
Related Topic(s): Democrats; Iowa Caucus; Satellites; Voting, Add Tags
Add to My Group(s)
Go To Commenting
The views expressed herein are the sole responsibility of the author and do not necessarily reflect those of this website or its editors.